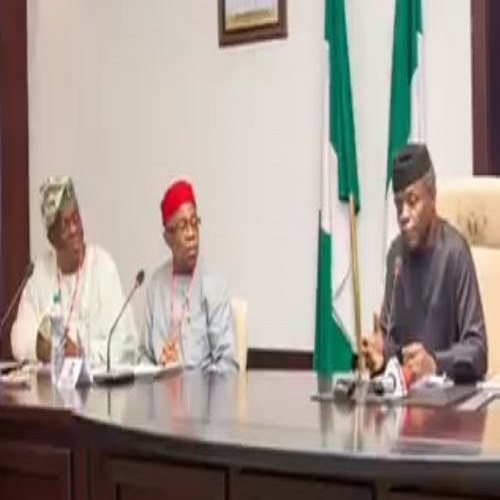 The Federal Government is partnering with neighbouring countries to ensure that the country’s porous borders are better policed to tackle smuggling and the influx of counterfeit products into the country, according to Vice President Yemi Osinbajo, SAN.

Prof. Osinbajo said that this will further promote the patronage of Made-in-Nigeria products and boost the country’s manufacturing sector.

The Vice President said this when a delegation of the Manufacturers Association of Nigeria (MAN) paid a visit to him today at the Presidential Villa, Abuja. MAN, led by its President, Dr. Frank Udemba Jacobs, presented the Vice President a report on its advocacy campaign for the patronage of Made-in-Nigeria products.

Speaking further on the issue of checking smuggling and counterfeit products, the Vice President said certain sections of the laws should be amended to attract stringent monetary penalties for defaulters, which would serve as a deterrent and also to protect the quality of goods in the country.

“More importantly, the whole issue is that we are able to police the borders. Last week we had discussions with all the agencies connected; including the Customs, the Minister of Internal Affairs, NPA, and we were looking at how we can work with our neighbours, especially the Benin Republic, and our neighbours also in the North, to police our borders as much as we can,” Prof. Osinbajo said.

The Vice President reiterated that the major focus of the Buhari’s administration’s Ease of Doing Business reforms was to increasing patronage for locally manufactured goods, as well as to create an enabling environment for the private sector and businesses in the country to thrive.

He said, “The whole point of the Executive Order on promoting “Made-in-Nigeria” products was to set the ball rolling, to create an environment for this sort of initiative, and I am extremely grateful to MAN for the work that it has done in bringing this to the fore.”

Earlier in his remark, the President of MAN noted that the association’s advocacy campaign was not only aimed at improving the patronage of locally manufactured products by Nigerians but to also help create more jobs for Nigerians in the local manufacturing sector by reducing imports.

The Vice President noted that the Federal Government will consider the request made by the association for a 35 percent margin of preference for Made-in-Nigeria products for government procurement.

“I think that, in this particular case, the 35 percent threshold is entirely reasonable. We should be able to do better than that in terms of driving government procurement,” Prof Osinbajo said, adding that the country has a huge market for locally manufactured products, especially in the textile and footwear industries. He further said that government has ordered some of these products for the military and other uniformed agencies of government.