World Cup Nightmare: Argentina On The Brink Of Missing Russia 2018 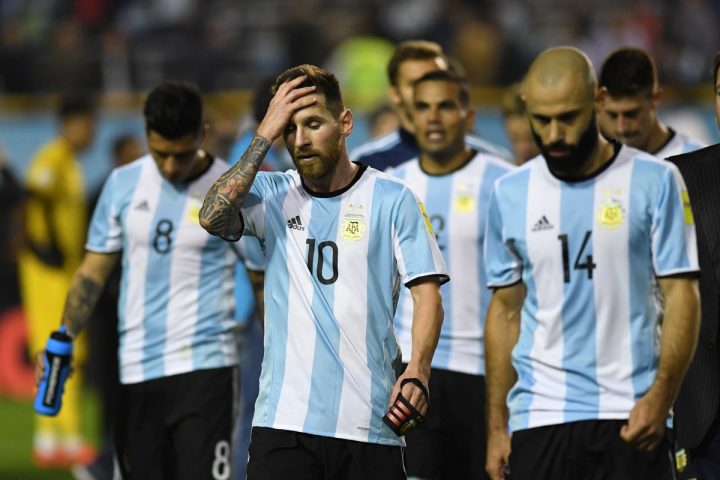 Argentina is on the brink of missing the Russia 2018 FIFA World Cup during next year’s summer. The Albiceleste have been consistent over decades in qualifying for the most celebrated Football event in the World.

The five-time World Cup finalist and two-time Champions fail to beat Peru as the drew 0-0 at home, denting their chances of qualifying for the FIFA World Cup in Russia next year.

It was all to no avail, however. Argentina once more dominated possession throughout the 90 minutes, but could not find a way through a Peru side also playing for their lives with the tantalising prize of the World Cup looming just over the horizon. On the few occasions they did, the Albiceleste once more came up against a goalkeeper apparently channeling the spirit of an entire nation in order to keep the hosts at bay.

Pedro Gallese came up with top-drawer saves to deny Benedetto, Lucas Biglia and Gomez, with Messi additionally striking the post.

It was all bark but no bite from the home team. The rotten fortune that afflicted the nation on Thursday can be summed up in a five-minute cameo from Fernando Gago, who entered in the second half to a standing ovation from his adoring Bombonera but was soon going back down the tunnel after turning awkwardly.

Sampaoli may point to that setback, as well as an admittedly ample number of chances squandered, in his bid to explain just what went wrong at the Bombonera.

Messi, too, will rue a performance that ranked far from his best. As a provider, he will feel more than aggrieved that fine passes into Benedetto and Gomez were not converted, but La Pulga was equally guilty in turning onto the post a rebound that nine times out of 10 one would expect him to bury. Perhaps the anxiety that has gripped an entire nation in this tortuous qualifying campaign has finally caught up with the maestro: as the minutes went on he turned skittish, losing the clockwork precision that is his trademark and failing to beat a Peru defence that gnawed at his ankles like a pack of rabid pit bull terriers.

Now as well as football aficionados, Argentina fans must turn to amateur mathematics. Thursday’s 0-0 draw leaves the Albiceleste in sixth place, behind Peru on goals scored and out of the World Cup going into the last game. That decider is in Quito against Ecuador, a daunting prospect at altitude at any time but more so with so much at stake.

A draw could still see them take a playoff spot, provided Paraguay drop points and the Inca come unstuck at home against Colombia or Chile lose heavily against a Brazil that, if Thursday’s evidence in Bolivia is anything to go by, are coasting serenely through the rest of this campaign. But realistically only a win will do, and that will not happen unless they break a goal drought that is inexplicable however you wish to look at it.