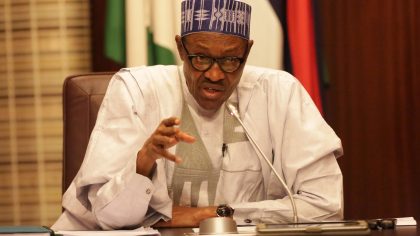 Nigerian government is focusing on opening the economy for more private sector participation especially in the power sector. Vice president Yemi Osinbajo at an interactive session at the financial times Africa summit in london says government belief this would further lead to rapid growth especially in the agro-allied sector.

World Economic Outlook 2017-2018
Global economic outlook has seen a marginal increase in 2017 as global economic recovery takes form.
the International Monetary Fund (IMF) tuesday announced that global growth is strengthening and is broad-based, but pockets of negative growth and concern over debt-levels mean that policy makers must not be complacent.  details with leah Katung Babatunde from Washington dc.

The senate has received a second executive communication from president Muhammadu Buhari since their resumption requesting for approval of a 5.5 billion dollar loan, to fund the 2017 budget. similarly, the house of representatives also received the presidential request for approval of a five-point- five billion us dollars loan to fundthe deficit in the 2017 appropriation act.

A strategic meeting aimed at consolidating and sustaining the prevailing peace enterprise for sustainable growth and development of the country has ended at the aso rock villa. state house correspondent, Adamu Sambo reports that the meeting was convened by president Muhammadu Buhari who also engaged governor Abiola Ajimobi of Oyo State

The Nigerian military has described the third quarter of its operation Ruwan wuta as successful. commandant air component of operation lafia dole air commodore Tajudeen Yusuf disclosed this to the media at the operation’s third quarter briefing in Yola, Adamawa state. He further added that inspte of challenges encountered, masive successes were recorded in airlift operations as eight hundred and forty two missions were conducted between july and september.

Vice President Yemi Osinbajo has reiterated government’s commitment to bequeath a modern economy to Nigerians. he was speaking at the 23rd Nigerian economic summit in abuja.

Leader of the team of judges handling the boko haram trials across the country, justice Binta Nyako has promised expeditious trial of suspected terrorists at the various detention  facilities.   justice Binta Nyako who is of the federal high court, abuja stated this while leading other judicial officers, prosecutors and the defence team of the legal aid council of Nigeria on an inspection of the four syndicated courts located within the premises of wawa military cantonment, kainji in borgu local government area of Niger state.

Ekweremadu On Nigeria and Restructuring
Deputy Senate President, Ike Ekweremadu says fragmentation is not the solution to Nigeria’s challenges, rather, social justice for all Nigerians through a legal and parliamentary framework is what is required for conflict resolution across the country.  joy osiagwu reports that senator Ekweremadu was responding to questions in new york about Nigerians agitating for a referendum on the existence of the nation as a single entity.

As Nigerians continue to applaud the president Buhari administration in tackling security matters head on with great success and consolidating the gains of democracy, a political group known as concerned democrats of conscience has equally followed suit and described the administration as a mission in the service of humanity. timothy yusuf reports on the group’s media briefing held in abuja.

Enugu state has recorded its first case of suspected monkey pox disease. the state commissioner for health, Dr. Finton Ekochin who confirmed this to news men said a specimen of the patient has been sent to the federal disease control unit, abuja for diagnosis.

A motion on the urgent need for proactive steps to nip in the bud the reported outbreak of monkey pox disease in Nigeria moved by senator representing bauchi south, Ali Wakili has been adopted. the national centre for disease control is expected to engage the senate committee on health and communicable diseases on the outbreak.

Focus is on mental health on work place as the global community commemorates the 2017 world mental health day. health correspondent Rabi Abdallah reports that this is against the background that one in five persons in the work place experiences mental health condition, just as the annual global cost of mental health problems is estimated at 2.5 trillion dollars.

One thousand women from kwara state are to benefit from the future assured programme, an initiative of the wife of Nigerian president, Aisha Muhammadu Buhari. This was disclosed at the flag off of the programme in ilorin, kwara state capital.

Christianity must interface with other religions in the country for the common purpose of correcting societal ills and development of the nation. the executive secretary of the Nigeria christian pilgrims commission (NCPC) gave the advice while inaugurating the 2017 christian pilgrims mobilisation committee in abuja.

The United Kingdom has pledged assistance to the federal capital territory administration in the area of capacity building for counter-terrorism operations and disaster management. advisor on counter-terrorism in the UK foreign office in london, Nicholas Martins made this known in abuja during a collaboration visit to the fct emergency management agency, FEMA

Addressing the challenges of youth’s restiveness through interventions i education and economic empowerment must be a priority for those in leadership. Governor Tanko-Almakura of Nasarawa state stated this when he played host to the participants of national war college on study tour of the state.

NICO and Culture For National Development

The national institute for cultural orientation, nico has identified culture as one critical tool that will accelerate development of the economy. executive secretary of nico, Barclays Ayakoroma made this known at the institute’s quarterly lecture in abuja.

The Nigerian Television Authority, NTA has thrown its support for the successful staging of the 2017 Sarauniya beauty pageant. general manager, NTA Entertainment, Bola Oyeyemi who represented the director general, Yakubu Ibn Mohammed gave the assurance when she hosted the organizers of the event in abuja.