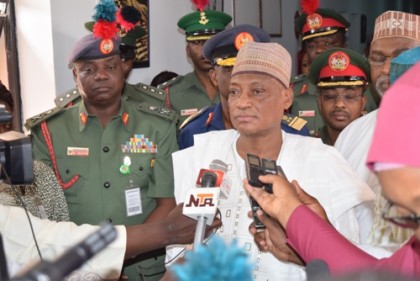 The Minister of Defence, Mansur Dan-Ali, has said that military engagement alone cannot provide sustainable solution to the asymmetric security threats in the country, given their complexity and root causes.

Dan-Ali made the remark on Tuesday in Abuja at the opening of a four-day international seminar on “Managing Asymmetric Security Challenges in the 21st Century.”

The minister who was represented by the Chief of Defence Staff, Gen. Abayomi Olonisakin, said the complexity and causes of the threats called for political, socio-economic and military approaches.

He said that a combination of approaches would see the civilians, the military and other agencies working and complementing the efforts of one another to achieve the set objectives.

The minister noted that during the cold war era the understanding and managing of national and international security threats was excessively in military terms.

Dan-Ali, however, said that the post-cold war era had seen the emergence of security threats mostly from within, with multi-faceted and multi-dimensional nature.

This, he said, had shifted the concept of security beyond only military-centered definition and approach.

“Also, a prominent feature of this era is the emergence of non-state groups that are threatening national, regional and international security around the globe.

“Managing these new emerging threats has become a fundamental challenge in view of their globalised and transnational nature, which has been compounded by the revolution in information and communication technology.

“Given the nature of these new threats, no single country can successfully address asymmetry threats in isolation hence the imperative for nation-states to collaborate and synergise with one another.”

Dan-Ali said the military must have an excellent understanding of how asymmetric security challenges mutate from latest stage to violence in the 21st century, in order to successfully tackle it.

Earlier, the Chief of Army, Lt.-Gen. Tukur Buratai, said that tackling the challenge of asymmetric warfare was not an easy task, given the enormous resources and type of strategies it required to counter it.

“Despite this, I am optimistic that the caliber of resources persons and participants gathered here will tremendously assist in proffering practical solutions to the challenges of asymmetric warfare,” Buratai said. (NAN)