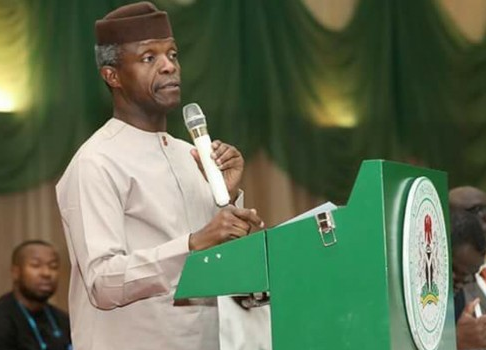 Let me say how honoured I am to join this distinguished company to witness the presentation of the Afrochampions Initiative, and I must say that any idea that has managed to attract the interests of two of Africa’s most far-sighted leaders, Presidents Olusegun Obasanjo and Thabo Mbeki and Africa’s foremost entrepreneur and richest man, Alhaji Aliko Dangote must be a good idea indeed. Who am I to say that such is not a good idea? Even if it is not a good idea, they will make sure that it becomes one. (General Applause)

In the last few years, it has become obvious to many African countries that both momentum and common sense are in favour of the private sector leading our economies and championing initiatives that will drive-in traffic, trade and commerce. The role of the public sector is to catalyse, umpire and to incentivise.

But whether we like it or not, the private sector in Africa is already building world class brands and trading everywhere and I think that was obvious from the last but one presentation.

In manufacturing, the Dangote group is already manufacturing cement in several African countries; in banking, Ecobank, UBA, GTB, Access bank are all doing incredible things across the African continent. In Telecoms – MTN, & broadband infrastructure firm – MainOne, are doing business everywhere on the continent.

Despite the rhetoric of African governments since the days of OAU and now the AU, our governments appear to be late starters in concrete action. Regional integration is a key requirement for the region’s development but it remains at very low levels.

And I think the commissioner has already mentioned some of the reasons why.
We still have one of the lowest trade integration levels at under 20% while Asia is in the 40th percentile and European integration is much further ahead at about 60%.
The fact remains that other regions play as a bloc, but Africa is still slightly splintered into several different economies, and the ease of doing business across the region remains a significant challenge.

But I am pleased to say though that all of that is changing, flowing from the agenda 2063 of the African Union, the continental future era initiative which we have just heard about, the launch of the African passport and other initiatives on the free movement of persons; it is becoming clearer and clearer on how we intend to go in regional integration and it is becoming clearer and clearer how quickly we can move.

The summit of the heads of state of the African Union in July, again focused on some of these initiatives, and I am convinced that we are on the threshold of seeing a deeper and more integrated African market.

On our part in Nigeria, it is clearly for us, a strategic priority that we have a single integrated African market that is deep enough to do all of what we can do and for our potential.

Already African goods are all over Africa but as you know, mostly through informal channels, a formalised market is therefore important to us such that we can benefit maximally.

But these public sector initiatives need the sense of urgency that the private sector will bring, this is why we certainly believe in the Afrochampions Initiative because we think it is the private sector that will do what is required to bring the urgency and sense of mission to all that we have been trying to do in the African Union.

We would like to see greater synergy and collaboration between the Afrochampions and all the organs of the AU involved in economic integration issues, their enthusiasm and energy is perhaps to shorten the arm that the AU needs at this time.

I would like to congratulate the chairperson and the other visionaries of Afrochampions on this very visionary initiative. I want to say that we are well and truly behind you. Well done indeed.
Thank you very much.