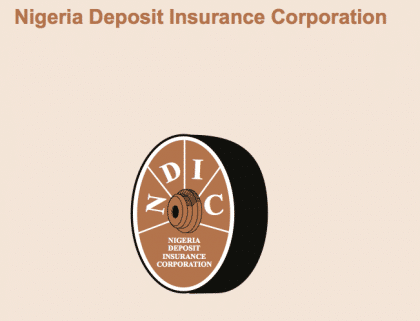 The Nigeria Deposit Insurance Corporation (NDIC) has been conferred with special recognition for raising the bar of excellent performance in discharging its mandate.

Alhaji Umaru Ibrahim, the Managing Director of NDIC, disclosed this in a statement by Mr Hakeem Bakare of the Communications and Public Affairs Department of NDIC on Tuesday in Abuja.

Ibrahim said the corporation was conferred with the Special Recognition and Commendation Award for Excellence in Banking (Public Service) at the Business Day Banking Awards 2017 held on Oct. 14.

He said NDIC was adjudged as “an outstanding public service provider” with sterling performance which stood high above its peers in effective leadership and accomplishments.

He said the commendation was made in a letter to the corporation by the awards committee anchored by Business Day Research and Intelligence Unit (BRIU).

“The Award Committee, which was made up of eminent Nigerians, reviewed the pragmatic and tangible transformations which the Corporation brought into management and execution of its core mandate.

“This includes mitigation of corruption, insider abuse as well as containing non-performing loans in the nation’s financial system.

“The Committee stated that NDIC has also pursued the observance of corporate governance principles in the Nigeria’s financial system, with declaration that this contribution and other milestone achievements earned the Corporation the public recognition,’’ Ibrahim said.

He said that while commending the Corporation on the feat, the organisers said that the NDIC had also implemented good institutional transformation policies.

This, he said, had resulted in friendly business environment, expansion of opportunities and a huge contributions towards economic development.

Ibrahim expressed the corporation’s delight for the honour, adding that it would further challenge NDIC to raise the bar of excellent performance on the discharge of its mandate.

The NDIC boss recalled the rebranding of the Corporation in 2013, which gave rise to the overhaul of its processes, procedures, systems and methods of operation in line with global best practices in deposit insurance.

He expressed delight that the initiatives of the corporation were paying off with recognitions coming from home and abroad.

The News Agency of Nigeria (NAN) recalls that the NDIC in 2014 won the International Association of Deposit Insurers (IADI) award as the Best Deposit Insurance Organisation of the Year under Category 2 of the IADI Core Principles on Compliance and International Collaboration.

In 2016, the MD/CE was also re-elected unopposed into the Executive Committee of the IADI for a term of three years in view of his outstanding performance in his first term between 2013 and 2016.(NAN)