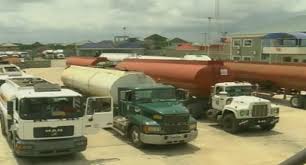 Truck drivers in Lokoja, Kogi, on Wednesday blocked Abuja-Lokoja highway protesting alleged killing of one of them over non-payment of N5,000 toll.

The News Agency of Nigeria (NAN) reports that the situation caused gridlock on the busy highway linking the northern and the southern parts of the country.

NAN reports that many travelers were stranded on both ends of the Murtala Muhammad Bridge in Lokoja.

An eye-witness told newsmen at Akpanya, near the bridge, that the driver was flagged down at about 1 a.m. on Oct. 18 by revenue collectors from Kogi Agricultural Produce Board.

The witness who preferred anonymity, said the deceased was on transit from the Northern part of the country to the South when the revenue collectors allegedly demanded money from him.

He alleged that the late driver told them that he had only N1,500 and could only part with N1,000 and this drew the collectors’ ire.

The driver, whose name could not be immediately ascertained, was allegedly hit on the head with clubs following the argument and he collapsed and eventually died.

In the ensuing milieu that followed the death of the driver, the Abuja-Lokoja road was blocked, resulting in heavy gridlock which left many travelers from both sides stranded.

The Chairman of the Kogi chapter of National Union of Road Transport Workers (NURTW), Alhaji Tanko Ali, who also confirmed the development, said the truck was coming from Maiduguri and was accosted by the revenue men around 1 a.m.

He said that the failure of the driver to pay certain dues led to an argument, during which they allegedly descended on him and in the process, he was beaten to death.

The Police Public Relations Officer in the state, ASP William Aya, confirmed that the tanker driver had issues with the Agricultural produce revenue collectors.

He also confirmed that the issue led to blockage of the road, but denied any knowledge of death of the driver or anyone else at the scene.

He said that the police, in collaboration with other security agencies, were working hard to clear the road. (NAN)