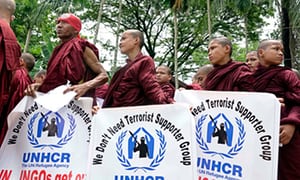 The UN gathered donor countries in Geneva on Monday to shore up 434 million dollars in aid for the world’s fastest-growing refugee crisis that has been unfolding between Myanmar and Bangladesh.

Bangladesh, one of Asia’s poorest countries, has taken in some 580,000 minority Rohingyas who have fled alleged atrocities in Myanmar’s Rakhine state since August.

The sum is calculated to fund UN operations until the end of February in Bangladesh, which has kept its borders open, despite being one of Asia’s poorest countries.

“The needs are massive.”

Refuges in and around the Bangladeshi fishing town of Cox’s Bazar have faced food and water shortages, lack of shelters and inadequate sanitation facilities, raising the risk of disease outbreaks.

Nearly six out of 10 refugees are children, many of them arriving malnourished.

The Rohingyas are a marginalised Muslim group in Buddhist-majority Myanmar.

They have been struggling with poverty and discrimination, including the denial of citizenship rights.

In August, Myanmar security forces launched an operation against attacks by Rohingya militants in Rakhine.

UN human rights investigators have concluded that the burning of villages, persecution of community leaders as well as killings and rapes amount to a systematic effort to drive the Rohingyas out.

Beyond appealing for funds, UN leaders urged the international community to get involved to stop the violence and discrimination.

“This is not an isolated crisis,” UN emergency aid chief Mark Lowcock said, pointing to decades of “persecution, violation and displacement.”(dpa/NAN)