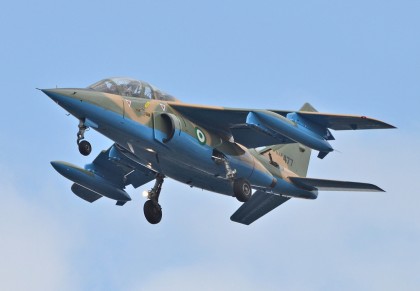 The Nigerian Air Force (NAF), says it has commenced Operation “RUWAN WUTA II,” as part of efforts to further decimate the remnant activities of the insurgents in the country.

The Director of Public Relations and Information, NAF Headquarters, Air Commodore Olatokunbo Adesanya, disclosed this in a statement on Wednesday in Abuja.

Adesanya said the operation, which commenced on Oct. 23, was essentially an intensive day and night aerial bombardment designed to rain significant fire on freshly discovered hideouts of the insurgents.

“On the first day of the operation, NAF conducted several Air Interdiction missions in the North-East, including one on a location in Garin Maloma.

“Previous intelligence reports, gathered through Intelligence, Surveillance and Reconnaissance (ISR) missions by NAF ISR platforms had revealed the presence of a large number of insurgents in some dispersed structures in Garin Maloma.

“Consequently, the location was attacked, in succession, by two Alpha Jet aircraft,” he said.

“The first Alpha Jet aircraft attacked the settlement with bombs, which destroyed the targeted structures and caused fire around the structures where the insurgents were hiding, sending a few survivors scampering for safety,” he added.

The director explained that the second Alpha Jet aircraft, which strafed the area with rockets, subsequently took out some of the fleeing insurgents survivors.

“In a similar development, the insurgents locations in places such as Arra and Boboshe, amongst others, were successfully attacked by NAF Mi-17 helicopter and the newly acquired Mi-35M helicopter,” he said (NAN)