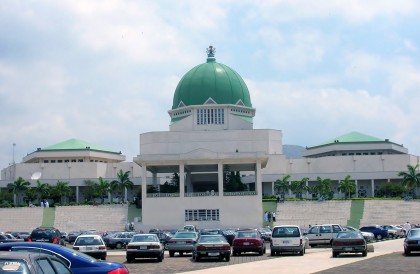 The house of representatives has emphasized the need to make sustainable laws governing oil exploration across the country. this came up when the house committee on environment and habitat visited some communities hosting oil exploration companies in River state.

President Muhammadu Buhari has ordered the disengagement of the former chairman of the presidential task force on pensions reform, Abdulrasheed Maina from the federal service. special adviser to the president on media and publicity, Femi Adesina announced this in a statement. a memo has also been sent to the head of service of the federation, demanding full report on circumstances that led to the recall of Abdulrasheed Maina and posting to the interior ministry. The reports, according to Mr Adesina, is to be submitted to the chief of staff to the president before the end of work this monday.

HCSF Did Not Re-instate Maina

President Muhammadu Buhari has departed for Niamey, Republic of Niger, to participate in a meeting on common currency for the west African sub-region.  a statement from special adviser to the president on media and publicity Femi Adesina says member countries of the ECOWAS task force on common currency are ‎Nigeria, Cote d’ivoire, Ghana and Niger.  the statement says the minister of finance, Mrs kemi Adeosun and the central bank of Nigeria governor, Mr Godwin Emefiele, are accompaning the president to the meeting. Kebbi and Sokoto state governors as well as the minister of foreign affairs are also part of the president’s entourage. President Buhari will return to Abuja later today.

Concerted effort is being made to compliment parents and schools as government intensifies its fight against child labour and trafficking in the country. the latest of such effort is the presentation of award of a hope-aid organization essay and art competition for secondary schools students from five states including FCT. The competition was organized by civil society action against child labour and trafficking in Nigeria and border communities.

The launch of the “Nigeria digest of education statistics and Nigeria education indicates 2016 is evidence of the federal government’s determination to strengthen the education sector through availability of reliable and creditable data.the remark by Nigeria’s minister of state for education, pro. Anthony Anwukah was while calling for a second look at the constitutional provision which domiciled education matters in the concurrent list.

President Muhammadu Buhari has challenged media handlers of states’ executives to embrace the culture of using facts and figures in promoting their principals. president Buhari stated this in a message at the opening of conference organized by the Nigeria governors forum conference for executive media handlers in Abuja.

Wife of the President Aisha Muhammadu Buhari has enjoined Nigerians to always remain their brothers keeper  so as to promotion peace and in the country this came to light when she paid a visit to condole with the family of Alhaji musa Bello and Dr Mahmud Tukur in Kaduna over the death of one of their family members; Ahmed Usman.

Governor Umaru Tanko Al-makura of Nasarawa state is seeking the collaboration of the United States of America towards the implementation of inclusive education for the physically challenged. the governor who said this while receiving the us ambassador to Nigeria William Stuart Synington in Lafia said his administration has achieved milestones on promoting the well-being of the target group.

Nigeria has formally cautioned member countries of the economic community of west African states to tread cautiously in pushing for a single currency in the sub-region by the year 2020. President Muhammadu Buhari who gave the caution while addressing members of the presidential task force on the single currency for ECOWAS in a closed session drew their attention to the challenges faced by the European union while pursuing similar objectives.

Bauchi state government has taken its anti-corruption crusade to the next level through collaboration with anti graft agencies in the country to assist it in eliminating the scourge. Mohammud ibn Muhammad reports that one of such collaboration was through a jointly organized anti-corruption summit with ICPC and the foundation for transparency and accountability.

Modalities are ongoing for arbitration in Africa to ease settlement of business conflicts out of court for the economic rejuvenation of the continent. this is part of the advocacy at the 2017 second biannual African arbitration round table conference in Abuja which brought together chattered arbitrators from around the globe. Iliyasu Ali yakubu reports that the conference is chatting a way forward in strengthening arbitration in Africa.

president Muhamadu Buhari tuesday in Niamey, Niger, urged ECOWAS member countries to tread carefully in pushing for a single currency in the sub-region by 2020, drawing attention to the challenges faced by the European union in realising the same goal. in his speech at the 4th meeting of the presidential task force on the ECOWAS currency programme, president Buhari said the necessary economic fundamentals among countries continue to differ over the years, making it more difficult to pull through with the project by 2020.

Senate at tuesdays plenary has commended president Muhammadu Buhari for his prompt action on the saga surrounding the return to Nigeria and resumption as dirctor into the repulic service of Abdulrasheed Maina, despite being dismissed and wanted by the Economic and Financial Crime commision EFCC. National Assemly Corrrespondent Denis Adegunloye report that this followed a point of other raised by senator representing Bauchi central Isah Misau. the lawmakers also considered some motions including the need to review the privatization of public enterprise in Nigeria.