‘You have fulfilled your Bauchi promises’, 51 NYSC Doctors tell Shettima 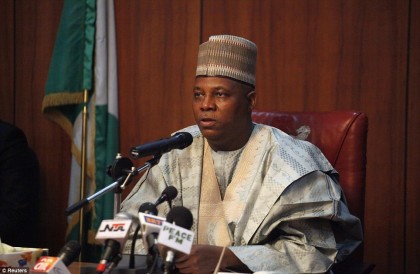 Fifty one Medical graduates of the National Youth Service Corps deployed to Borno State on Sunday treated Governor Kashim Shettima to a dinner saying the honour was to appreciate him for fulfilling all the promises he made when he visited their temporary orientation camp at the Bauchi State Institute of Education in Kangere, Bauchi, in December, 2016, where the Governor made attractive promises in order to persuade medical doctors, pharmacists, Nurses, Medical Laboratory Scientists and Physiotherapists who were afraid of serving in Borno State and were contemplating re-deployment.
The Governor had in 2016, promised ‎he was providing security; approving monthly allowance of N100,000 for each of the 35 medical doctors; N50,000 to each of the16 paramedics (Pharmacists, Nurses, Medical Laboratory Scientists and Physiotherapists) in addition to providing luxuriously furnished accommodation for all of them throughout their service year in Borno State.
“Governor Kashim Shettima has kept each of these promises and this makes him not just a very unique leader but a father for us that we are gathered here to appreciate” Dr Amina Atabo (from Kogi State), outgoing President of Borno Medical Corps said at a dinner organized by her colleagues to appreciate the Governor for keeping his promises and making them enjoy memorable service year.
‎A‎ total of 1,387‎ corps members were posted to Borno State for the Batch ‘B’ 2016 service year but they held their three weeks orientation in Bauchi during which Shettima visited them to assure all of them of their safety. The Governor then held one on one meetings with medical graduates that included 35 Medical Doctors and 16 paramedics amongst them, ‎Pharmacists, Nurses, Medical Laboratory Scientists and Physiotherapists‎.
With the service rounding up, the corps members hosted Shettima in Maiduguri. Some of the 51 medical graduates are due to pass out from the NYSC this October while others are to graduate by December, this year. The corps members wanted to hold the dinner as a group to celebrate a Governor they said, had touched their lives positively.
‎”Our gathering today to appreciate and Honour Governor Kashim Shettima, was because he has laid this path for us. We decided to confer on him, an ward of ‎’icon of true change’. He keeps to his words” said pharmacist David Namo who spoke on behalf of paramedics.
While presenting an Award of Honour to the Governor, Dr. Atabo called on well meaning Nigerians to emulate him for being a leader worthy of emulation.
Governor Shettima thanked the outgoing Corp members for what he called a ‘a pleasant surprise’.
“Let me say here that this award will occupy a special place in my heart for the rest of my life. Thank you so much to all outgoing Corps members who have served in this trying time. Thank you so much once again. Like I did when I met you last, I will once again hold another one on one meetings with each of you to discuss your future and as you might recall, I spoke with you freely in Bauchi to make your own decisions without any intimidation, we will do the same for the second time. I also have a special package for each of you in appreciation of your patriotism but I won’t make it public” Shettima said.