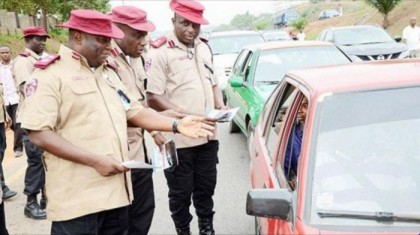 The Federal Road Safety Corps (FRSC) says there are 79 portions in the critical road corridors in the country calling for Federal Government’s attention before the yuletide.

FRSC Corps Marshal Boboye Oyeyemi said this in an interview with the News Agency of Nigeria (NAN) at the FRSC Academy in Udi, Enugu State on Thursday.

Oyeyemi said that the corps had been talking with the Ministry of Power,Works and Housing on how best to put most of the critical road corridors in shape before the yuletide.

`We have submitted a report containing 79 portions in the critical road corridors throughout the country to the Minister of Power, Works and Housing.

‘’We believe the report will be given due attention before the yuletide,’’ he said.

According to him, it is also necessary to fix critical road corridors to check traffic build-ups.

“We thank God that the Minister of Works has graciously agreed to our plea of fixing and doing palliative works on most of the critical road corridors identified.

On Ember month programme, FRSC boss said the corps was ready to carry out comprehensive enforcement of traffic violations, to serve as deterrent for negative road habits and negligence.

“All these range of items and compliance, when got right, will engender safe and secured road for all road users in all our road corridors during the ember months.’’

He also said that all Zonal, Sector, Unit and Route Commanders had been “well briefed’’ on what to do and look out for, assuring that the corps would be more proactive ever than before.

Boboye noted that with the rainy season coming to an end and the heat on the increase, it became imperative for drivers to use quality tyres that would stand increasing heat.

He urged drivers in the habit of buying expired tyres for their vehicles to eschew such behaviour to check the rate of road crashes in the country.

“Our people must consider safety and life first and not just looking at cost alone.”

Oyeyemi called on road users to cooperate with FRSC officials and volunteers to ensure a safe and free-flowing traffic especially during the yuletide season.

NAN reports that Oyeyemi is on a three-day working visit to the FRSC Academy in Udi, Enugu State  where he inaugurated promotion course and examination for 179 officers on Wednesday.

The course and its examination will run for two weeks with various professionals coming to lecture and organise practical sessions with them. (NAN)