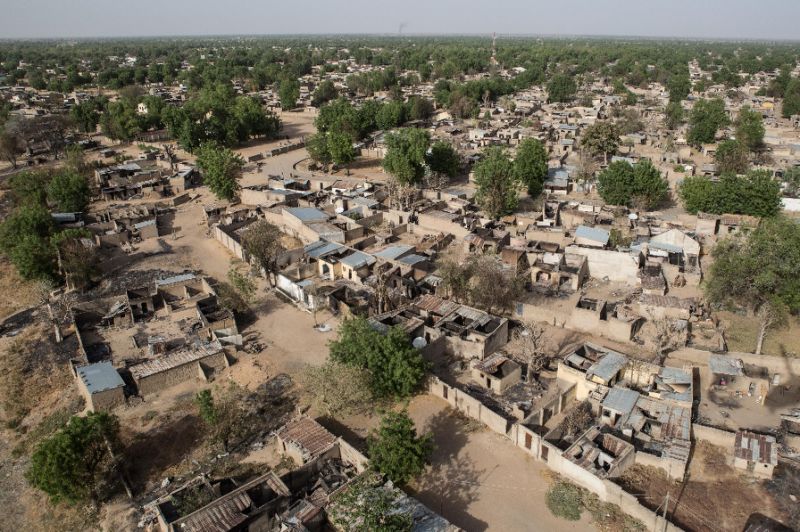 Sanni Onogu, Abuja: The Bama Emirate on Tuesday expressed gratitude to the Senate and indeed the National Assembly over their unflinching commitment to the rebuilding of the North East Region, following the devastation visited on the area by the Boko Haram insurgents.

The Shehu of Bama, Alhaji Kyari Umar Ibn El-Kanemi, gave the commendation when he led a delegation comprised of eminent sons and daughters of the Bama Emirate on a courtesy visit to the President of the Senate, Dr. Abubakar Bukola Saraki, at the National Assembly in Abuja.

El-Kanemi said: “I am in the National Assembly with my delegation to express our un-qualified gratitude to you the Senate President and other Distinguished Senators for the tremendous efforts towards rebuilding the North East Region, Borno State and particularly my emirate, Bama which was devastated by the insurgency.

“Since the recapture of our territories effort is now focused on the resettling of traumatized Internally Displaced Persons (IDPs),” he said. “We appreciate the efforts of the Senate under your leadership towards the multi-facet approach in giving our people succour and solace so that they can resume their normal lives.

“Your Excellency, the personal visit you paid to Borno State is a testimony that further buttresses the determination of the Senate and Senators to ensure that our people resume their normal life.

“I must particularly thank you for the manner and speed in which the North East Development Commission Establishment Bill was handled. Your Senate supported it overwhelmingly in which you personally took interest in the motion.

“In the same vein, I wish to further thank you most profoundly for bringing to the front burner the plight of the Internally Displaced Persons (IDPs). Your many resolutions and interventions have aided in tackling most of our challenges.

“You visited Borno State on many occasions and have followed suit by sending special Committees of Distinguished Senators on a fact finding mission which has aided the reconstruction process.

“We have lived in hope and our hope is rekindled by the Senate’s exemplary conduct. From the ashes of Bama, Borno and North East is rising again,” he said.

In his remarks, President of the Senate, Dr. Abubakar Bukola Saraki, noted that the 8th Senate, since inauguration, has remained resolute and unflinching in its support for innovative palliatives programs and arrangements that would relieve the suffering of the people in the North East.

“The Senate increased appropriations for humanitarian assistance in the region in this year’s budget,” Saraki said. “The North East Development Bill was also passed to foster development of the region and the oversight functions of our committees blew the whistle on corruption in the disbursement of IDP funds.”

He said that the Senate will work with the House of Representatives to harmonize their stance on The Bama Initiative.