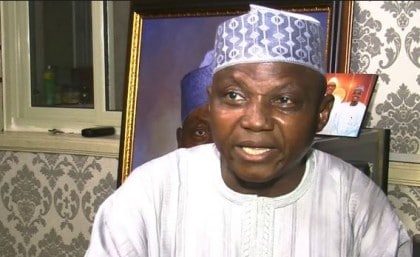 The presidency insists that the peoples democratic party PDP has no moral right to level any accusations against the current government in respect to Abdulrasheed Maina, the embattled former head of the presidential team on pension reforms. in a statement released to the media, Garba Shehu senior special assistant to the president on media and publicity, described Maina as one the monsters created by the former PDP government. Malam Shehu hinted that some influential officials loyal to the previous government may have been the invisible hand in the latest scandal that said the return of Maina to the public service despite being on EFCC’s wanted list and assured Nigerians of president Buhari’s determination to get to the bottom of the matter.

The presidential task force on the single currency for ECOWAS has restated unshakeable resolve towards ensuring that the sub-region achieved a monetary union for enhanced solidarity, economic well being and prosperity. in a communiqué issued at the end of its  4th meeting in Niamey, Niger Republic, the task force also promised to pursue with vigor the ECOWAS  economic, financial and monetary integration agenda.

Nigeria has formally cautioned member countries of the economic community of west African states to tread cautiously in pushing for a single currency in the sub-region by the year 2020. President Muhammadu Buhari who gave the caution while addressing members of the presidential task force on the single currency for ECOWAS in a closed session, drew their attention to the challenges faced by the European union while pursuing similar objectives.

Senate To Set Up Committee To Investigate Maina’s Saga

The senate at tuesday’s plenary resolved to set up an adhoc committee to investigate the circumstances surrounding the returning to Nigeria and resumption as director into the public service of Abdulrasheed Maina, despite being dismissed from the civil service and wanted by the economic and financial crimes commission, EFCC.

similarly, the house of representatives has resolved to carry out an investigation into the circumstances surrounding the reappearance and reinstatement of the former chairman of the presidential taskforce on pensions regime Abdulrasheed Maina. this is sequel to a motion of urgent public importance by representative Jagaba Adams Jagaba which also commended president Muhammadu Buhari for his swift action on the matter.

A high court in Katsina has adjourned the case instituted by the economic and financial crimes commission against the immediate past governor of Katsina state Ibrahim Shehu Shema for alleged financial misappropriation to February next year. this is sequel to the submission of the counsel to the accused who told the court that they have already approached the supreme court against the ruling of the court of appeal Kaduna.

Nigeria recorded a significant increase in export sales of 176.4 million dollars stemming from an increase in oil production as the country produced 4.12 million barrels more in the month of September. at the close of the monthly federation account allocation meeting, accountant general of the federation Ahmed Idris disclosed that activities resumed at the facades terminal for the first time since february 2016. a total of 558 billion naira was distributed by the three tiers of government. Ahmed Idris while giving a breakdown of the distributed figures said there was a significant decline in taxes and doused concerns over misuse of the ecological fund. gross statutory revenue decline in the month under review by 127 million naira even as the average price of crude oil decreased, however there was an exchange gain of 50.8 billion naira.

A regional conference on security in Bamako, Mali and the Sahel has ended with a call on member states to step up their security apparatus and architecture for regional peace and stability. minister of state foreign affairs, Khadiya Bukar Abba Ibrahim was at the conference and reaffirms the resolutions of the conference to include prevention and combating violent extremism and radicalization. the minister was also in Accra, Ghana for the 7th session of the Nigeria-Ghana joint commission where issues of consular and diplomatic economic, commercial, cultural and human trafficking cooperation were considered.

Military cooperation enhanced maritime legislation, and regular interface on cutting edge technologies have been identified as pivotal towards curbing maritime crime in Africa. this was the focal point at the 2017 Nigerian security exhibition and conference held in Abuja. Olajide Bello reports that the director general of NTA, Yakubu Ibn Mohammed represented the minister of information and culture.

Communities around zobe dam in Katsina state are set to benefit from its numerous resources after waiting for decades. This followed the signing of partnership agreement for the speedy completion of the project between federal government and Katsina state government.

Nigeria and turkey will strengthen cooperation between the security agencies of both countries to counter terrorism. this is part of the fallouts of president Muhammadu Buhari’s recent visit to turkey discussed by guests on NTA’s good morning Nigeria.

The on-going reforms in the ministry of communication are to position the ministry to become the highest revenue contributor to the country’s Gross Domestic Product, GDP. minister of communication, Abdur-Raheem Adebayo Shittu stated this at an interactive session with broadcast media managers and online editors in Abuja. Edino Justice reports that the minister wants the potential investors to take advantage of the time.

The Nigerian army has launched the first phase of its empowerment scheme to internally displaced persons. the event held at the Malkoli idp’s camp in Yola is part of Nigeria army’s effort at empowering victims of insurgency.

Participants at a public hearing in the regulatory conflict between the joint Admission and matriculation board jamb and Nigerian universities in offering admission to candidates have solicited a national policy to advance professional courses in the Nigerian tertiary institutions.

Senate On Plight Of Nigerian Scholars

Senate at Wednesday’s plenary has resolved that the appropriate agencies charged with payment at tuition fees and stipend of Nigerian scholarship students abroad, appear before the senate president. National assembly correspondent Denis Adegunloye reports that this followed a motion, under matters of urgent public importance, moved by the chief whip of the senate, Olusola Adeyeye, on the plight of Nigeria students in foreign countries. the lawmakers also considered the interim reports of the senate ad-hoc committee on alleged miss use and under-remittance in collection, remittance and expenditure by revenue generating agencies.

The minister of labour and employment, Chris Ngige has flag off skills and vocational training for 18,000 youth in Keebi state for self and income generation. the empowerment programme is part of the national directorate of employment initiative aimed at reducing the rate of unemployment across the states.

It is now a mandate for officers in charge of issuing drivers’ licenses and vehicle number plates to improve working relationship with their public, preserve transparency, accountability and selfless service.this was the marching order by the corps marshal, federal road safety corps, Boboye Oyeyemi to heads of drivers’ license centers at a training in Abuja.

A workshop for the validation of the draft frame work document for the implementation of the ECOWAS quality and industry database has taken place here in Abuja the federal capital territory. sixteen ECOWAS member nations and institutions were present at the workshop. yam, beans and other commodities from Nigeria were among goods refused entry into Europe and America for falling short of internal standards. but the validation of the draft frame work to enhance the ECOWAS quality and industry database is expected to address the challenge of poor quality and standards of goods for export. this much was highlighted by the representative of EU delegation to Nigeria and ECOWAS