President Buhari apologises To Lawmakers Over Cancellation Of Dinner 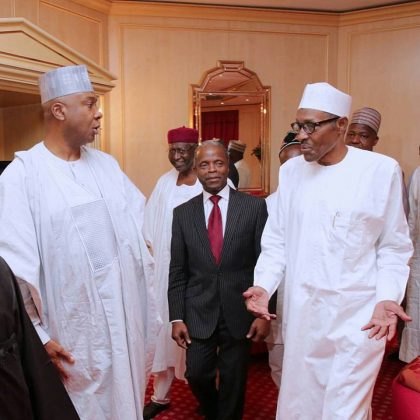 President Muhammadu Buhari has apologised to the leadership of the National Assembly over the cancellation of the planned dinner for the lawmakers in the State House.

The News Agency of Nigeria (NAN) reports that the President was to host the lawmakers to dinner at the new Banquet Hall of the State House, Abuja, by 8:30p.m. on Thursday.

He, however, met behind closed doors at his official residence with the Senate President, Bukola Saraki and the Speaker, House of Representatives, Yakubu Dogara with the Vice-President, Prof. Yemi Osinbajo and some presidential aides in attendance.

Mr Femi Adesina, the President’s Special Adviser on Media and Publicity, told State House correspondents on Thursday night that the President offered the apology after the closed door meeting with the Senate President and the Speaker..

He said the President rescheduled the dinner with the lawmakers for Oct. 31.

The News Agency of Nigeria (NAN) reliably learnt that the Thursday’s planned dinner failed to hold due to misunderstanding between security officials at the main gate of the Aso Rock and the lawmakers.

According to sources, the lawmakers were asked to come down from the bus conveying them to the Villa in order to be issued visitor’s tags, but they were said to have turned back.

The President was to use the opportunity of the dinner to discuss some national issues including the approved draft 2018 budget.

The draft budget was approved by the Federal Executive Council (FEC) on Oct. 26.(NAN)