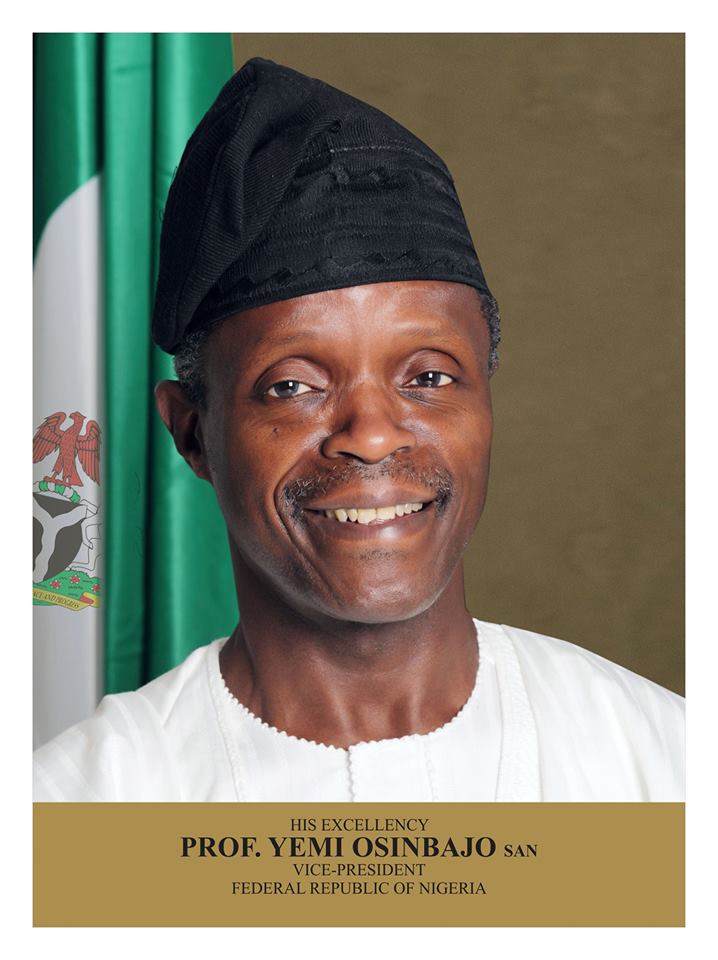 Laolu Akande! Abuja: We stand on the threshold of perhaps the most significant moment in the history of our nation. It is a time of economic challenges, ethnic and religious tensions. In May 2015, oil prices crashed from about $100 to $37; by 2016, we were losing 1 million barrels a day.

I say that we stand on the threshold of the most significant moment in our history, a time to build!

It is a time, when by the sheer grace of God, we have the greatest opportunities, to be, not just Africa’s largest economy by GDP, but also its most efficient and most productive.

We will, by 2050, be the 4th largest nation by population in the world, and we can, like China, also become one of the ten most successful economies in the world by that date. This is our best moment yet because we have shown that, despite the lowest earnings from oil in the past 15 years and, in 2016, recording the lowest production of oil in the past 20 years, and a recession as a consequence, we could still invest N1.3 trillion, the largest amount of money in capital projects in 15 years. We have shown that as difficult and painful as a recession might be, we have the capacity to come out of it and begin the building of an economy that emphasizes productivity and will provide enough jobs. We began the massive diversification of our economy by investing in agriculture. We set targets for self-sufficiency in rice, tomato paste, sorghum, millet. We are now one of the world’s largest producers of paddy rice. Milling is the weak link, but in the past year, several new mills have been open. The latest is the Wacot mill in Kebbi. Coscharis and Dangote have already invested in about 1 million Mt of capacity.

We are working daily on the whole farm- to- table value chain and we expect that the next industrial explosion will come from agri-business.

We are providing the environment for small businesses. The major problem is access to finance, and interest rates. We are working with the CBN and development finance institutions to crack that problem.

In the same period we have set aside the largest amount of money under a social investment scheme in our history that today employs 200,000 unemployed graduates, and will employ another 300,000 by next year. A school feeding programme that, today, feeds well over 3 million Nigerian children in public schools and we are set to triple that figure by the end of next year.

Our private sector is bullish. From the young men and women in technology and entertainment, to the small manufacturing and fabricating businesses in Aba, Awka, Kano, Katsina; to the larger manufacturers in the Ogun industrial zones and in Lagos; to the likes of Dangote building the largest single line Refinery in the world and a 550 kilometre subsea pipeline to the refinery; and Indorama, the largest single line fertilizer in the world, opened in September; we are seeing a renewed optimism; but more importantly, backward integration and greater use of local raw materials. By 2019, we will no longer be importing any petroleum products.

The major constraint remains power, but we are getting there. Our country will, in the next few years, turn the corner. We are in the pains of childbirth and we will soon experience the same sweetness and joy of childbirth.

What can hold us back? Two things.

First is corruption. We must deal with it decisively. It is difficult because it is systemic and affecting all institutions; perpetrated by a leadership elite that includes, not just politicians, but private sector individuals, and even religious leadership.

The second is tribalism, religion and other parochial tendencies. Unfortunately, because of state failure in some respects, many, even pastors, have gone into their tribal groups and speak and act mainly from that perspective. But, perhaps, the most important problem is the failure of Christian leadership to take our rightful place. We have focused our minds on an Islamic agenda, seeking and finding it in every action, or inaction. But where is the Christian agenda? We are too divided to craft one.

The truth of the matter is that the key to the unity and progress of Nigeria is in the church, the Church which is the pillar and ground of truth. It is the church that is imbued with the revelation that: there is neither Jew nor Greek, there is neither slave nor free, there is neither male nor female; for you are all one in Christ Jesus.

There is no way of dealing with deep ethnic and religious divisions, deepened by the injustices, blood-letting and prejudices over decades, except we reach into the gospel; the wisdom of God where Jesus repudiated the law of Moses on the question of retaliation and revenge and commanded that we not repay evil with evil, and to turn the other cheek when we are slapped on one.

In Matthew 5:38-43, the Bible says, “You have heard that it was said, ‘An eye for an eye and a tooth for a tooth.’ But I tell you not to resist an evil person. But whoever slaps you on your right cheek, turn the other to him also. If anyone wants to sue you and take away your tunic, let him have your cloak also. And whoever compels you to go one mile, go with him two… You have heard that it was said, ‘You shall love your neighbour and hate your enemy.”

Verse 44 and 45 also say: “But I say to you, love your enemies, bless those who curse you, do good to those who hate you, and pray for those who spitefully use you and persecute you, that you may be sons of your Father in heaven; for He makes His sun rise on the evil and on the good, and sends rain on the just and on the unjust.”

And to those who have urged revenge, the answer of our faith is, vengeance is mine, says the Lord.

How can a man pray for those who, in his presence, killed his children and ripped the unborn baby out of the womb of his pregnant wife? How do you love someone who comes into your community annually to kill as many as he can find? How do I turn the other cheek when the bones of the right side of my face have been cracked by the first slap? Is not wiser to defend ourselves and indeed kill our assailants?

The answer of the gospel is contrarian. Love even those who persecute you. That is the wisdom of God and, surely, it is as true as scripture that men will find it foolishness of the highest order. We must note that, despite the severe persecution of the early Christians, they never once fought back.

All through the book of the Acts of the Apostles, all we ever heard was how they were beaten, disrobed and stoned to death. Yet they turned the world upside down. And centuries after, the gospel is as powerful and transformative as when it was first preached.

But what we hear today, instead of the gospel, are cries of war; those telling us from pulpits that our enemy is a physical one who must be destroyed before he destroys us. It is populist and popular rhetoric; every time it is repeated in a Christian gathering it excites applause. Yet there it is, completely contrary to everything in the new covenant of Jesus Christ.

Permit me, then, to make a concluding submission. It is my view that the Nigerian elite – political, business and religious – regardless of ethnicity, think alike, and are driven by largely similar motivations. The elite are usually self-centred, selfish and unprepared to make the sacrifices either in service or self-restraint that leaders of successful communities must make. Playing the religious or ethnic card when necessary so as to get the masses in line is the grossly cynical default tactic of our elite. However, the most poignant point to note is that, when you look at any list of alleged perpetrators of a heinous case of corruption, all tribes, ethnicities and religions are well represented. In other words, high level corruption knows no religion or ethnicity.

Neither, by the way, is extreme poverty parochial in its incidence. The conspirators include Christians and Muslims from all the geopolitical zones. They are in governments, the legislature, the judiciary and the press. They are united, they protect each other, they fight for each other and they are prepared to go down together. They are one tribe, indivisible regardless of diversity. It is this tribe that confuse the arguments for change in society.

It is my respectful submission that, to build the new Nigeria, we need a new tribe; a tribe of men and women of all faiths, tribes and ethnicities; that are committed to a country run on high values of integrity, hard work, justice and love of country. A tribe of men and women who are prepared to make the sacrifices and self-constraints that are crucial to building a strong society. Who are prepared to stick together, fight corruption side by side, and insist on justice even where our friends are at the receiving end. A tribe consisting professionals, businessmen, politicians, religious leaders and all others who believe that this new Nigeria is possible.

Nigeria’s greatest battle is the one to bring integrity and accountability to public service and the private sector. Righteousness, the Bible says, exalts a nation. This requires a new way of thinking, a new leadership corps, a new tribe. The challenge today for us all, friends and colleagues, is to populate that new tribe. Thanks very much for your attention.