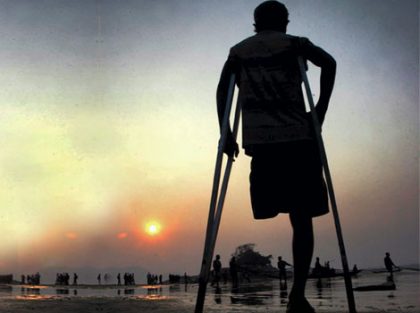 The Independent National Electoral Commission (INEC) is making efforts to put in place special polling booths for physically challenged persons using clutches to enable them to vote easily in 2019.

Dr Frankland Biriyai, Resident Electoral Commissioner (REC) for Cross River, made this known in Calabar on Monday during a meeting with members of the Joint National Association of Persons with Disabilities (PWDs), Cross River Chapter.

According to him, INEC is introducing a lot of measures aimed at cushioning hardships encountered by PWDs during the process of election.

“ We are going to have special glasses for the albinos; we are also trying to put in place special polling booths for those with clutches so that they can vote easily.

“Here in Cross River, I am going to instruct officers for the CVR to give special considerations for your members.

“You are very important to us; in 2019, we want to carry everybody along.

“I can assure you that you will be fully integrated into the electoral process. Don’t lose hope; keep working hard and be assured that we will never forget you,’’ he said.

The commissioner advised PWDs to come out to register in the third phase of the CVR which began on Monday.

Biriyai said that the meeting was in continuation of his meetings with election stakeholders in the state in order to achieve free, fair and credible elections in 2019.

Responding, Mr Ogar Inyang, the state Chairman of the PWDs, thanked the REC for the meeting, saying that it was the first time the association would meet with a REC.

Inyang said that members of the association were stigmatised during electoral processes.

He said that the stigmatisation was giving the association much concern.

“ This is the first time that any REC is meeting with us. I have to say that the way our members are being treated whenever we go to vote is a source of concern to us.

“However, now that you have raised our hope, we look forward to seeing all your promises for us fulfilled,’’  he said. (NAN)