FG To Pay N88bn To Victims Of Civil War 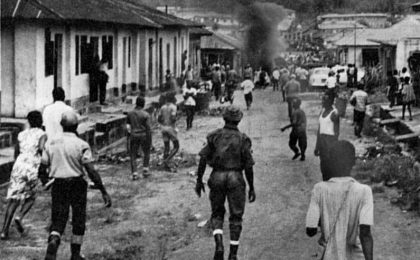 The Federal Government has agreed to pay N88 billion as compensation to victims of the Civil War in some affected states in the country.

This was the outcome of the consent judgment delivered by the ECOWAS Court of Justice in a case of negligence by the Federal Government to remove remnants of landmines and explosives from the civil war.

A consent judgment is issued when two parties agree to a settlement to end a lawsuit; the parties write up an agreement for the judge to sign.

The suit, filed by Mr Vincent Agu and 19 others against the Federal Government in 2012, had claimed that the government had failed to remove remnants of landmines and explosives since the end of the civil war in 1970.

They claimed that the lethal explosives had maimed, killed and destroyed innocent lives in their various communities.

The plaintiffs also claimed that apart from physical injuries, the abandonment of the war weapons had deprived them of the use of their farmlands, schools and churches.

In the consent judgement delivered by Justice Friday Nwoke on Monday, N50 billion would be paid victims of the war in 11 states in the southeast, southwest and parts of north central regions.

The 50 billion naira is expected to be paid to into a United Bank of Africa (UBA) account with number 1018230076 belonging Chief Noel Agwuocha Chukwukadibia, the nominated counsel for the war victims.

The remaining N38 billion would be for the evacuation of remnants of bombs and other lethal explosives and the construction of basic structures in the affected areas.

The money would be paid to Deminers Concept Nigeria Limited and RSB Holdings Nigeria Ltd charged with responsibility of evacuating the landmines.

By the consent judgement, the Federal Government would also establish a National Mine Action Centre in Owerri, Imo State for the victims.

Parties involved in the case acknowledged that 685 persons were selected and classified as survivors, identified by experts employed to screen and identify true victims of the war.

The experts identified 493 persons of them as victims of either explosions from leftovers of the landmines and other lethal weapons.

The parties in their agreement also acknowledged that a total of 17,000 bombs were recovered and destroyed while a total of 1,317 bombs were still in the stockpile located at the Mine Action Centre, Owerri.

The Federal Government also agreed to remove and destroy, without delay, the stockpile at the centre and in other areas.

Key signatories to the terms of settlement are Mr Chukwukadibia and Alex Williams for the applicants.