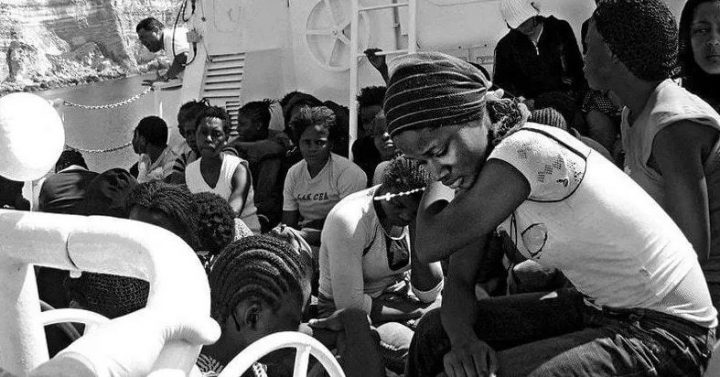 Acting Chairman of the Economic and Financial Crimes Commission (EFCC), Mr. Ibrahim Magu, has expressed the commission’s resolve to go after human traffickers.

Magu said this when a delegation from the National Agency for the Prohibition of Trafficking in Persons (NAPTIP) visited him in Abuja.

Spokesman of the commission, Mr. Wilson Uwujaren, who reported the visit in a statement, said the NAPTIP delegation was led by its Director-General, Dame Julie Okah-Donli.

Magu said the anti-graft agency had jurisdiction over human trafficking, which he said, was an offshoot of corruption.

“We are prepared to go after human traffickers because we strongly believe that it is an aspect of corruption, and corruption is the greatest enemy of Nigeria.

“Corruption is the reason why young Nigerians are risking their lives walking through the Mediterranean up to Spain and other European countries in search of greener pasture.

“It is a very sad situation, and we must change the trend by ensuring that we join hands to fight corruption, as this is the only solution to the ills militating against our country’s development,” he said.

While calling for NAPTIP’s partnership in the fight against corruption, Magu assured Okah-Donli of the EFCC’s support in combating the increasing cases of “organ harvesting” involving Nigerians.

“EFCC has an enormous task in the fight against corruption, and NAPTIP is also a stakeholder in the fight, so we also need your assistance and collaboration,” he said.

Okah-Donli, who said the visit was part of the agency’s familiarisation efforts, used the opportunity to highlight NAPTIP’s strides in combating human trafficking in the country.

According to her, the agency has busted a number of criminal activities, recorded 331 convictions since 2004, with various other ongoing cases at advanced stages in courts.

She added that NAPTIP had rescued many trafficked youths who were being rehabilitated and given a new lease of life.

Okah-Donli said: “organ trafficking, which is now becoming a big business, is another form of human trafficking”.

She said many youths were being lured into it and they become afraid to come out to tell their stories.

The DG requested the assistance of EFCC in confiscating assets of traffickers, and also in the area of training and developing its own academy.