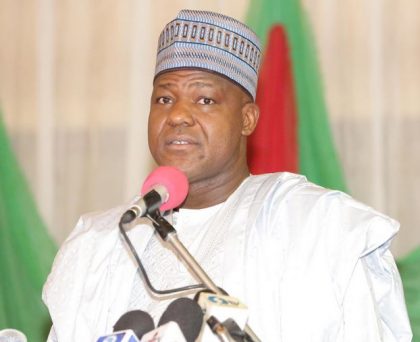 To ensure  full  realization of revenue  from tax  into the federation account  the house of representatives Adhoc  committee  investigating  operational  activities of telecommunication equipment’s  and firms has commenced  investigation into alleged one Hundred and forty three point four billion naira  tax  fraud by telecommunication  companies  from  2005 to date. At the first day of the investigative hearing the chairman of the committee  representative Ahmed Abu  explained that the  infringement  is an infraction in tax compliance status and remittances to various  government agencies by telecom Providers.while the chief whip of the house  Alhassan Ado

President Muhammadu Buhari has presented to the National Assembly a budget proposal of 8.612 trillion naira an increase of 30.8 percent from last year’s  budget. the 2018 budget expected to consolidate on previous budgets also made provisions for oversight and governance expenditure of the Ogoni clean up. key focus of the budget include power, works and Housing, Transportation and Defence. others are health and education.

Governor Darius Isaku of Taraba state has expressed formal appreciation of his people to president Muhammadu Buhari for the revitalization of the Mambila power project after 37 years of domancy. He stated this when he paid a thank you visit to the president who also engaged the minister of Niger delta affairs on the situation in the oil producing region.

The role of the national assembly in promoting economic recovery and sustainable development has been described as fundamental, and vice president Yemi Osinbajo says the quick passage of national budget is a further step towards ending recession. the vice president spoke at a summit organized by the house ad-hoc committee on economic recession in Abuja.

Lai Mohammed Brief’s On The State Of The Economy

Nigeria’s emergence from recession and immediately gaining a twenty fourth position leap in the world bank’s ranking of world nation’s best business destinations is part of the federal government’s policy on creating a global friendly business environment.information and culture minister Lai Mohammed stated this at a media briefing in Lagos. the minister spoke alongside with the coordinator of enabling business environment secretariat.

The national assembly will always work in collaboration with the executive without rancor, towards achieving the promises made to Nigerians. President of the senate Bukola Saraki and speaker house of representatives Yakubu Dogara stated this while receiving the secretary to the government of the federation, Boss Mustapha.

A federal high court in Abuja has granted an interim forfeiture order of eighteen properties allegedly belonging to the former governor of Katsina state Ibrahim Shehu Shema. Aliyu ukur reports that the said properties are located in Abuja, Katsina and Kano states.

The world health organization who says that for effective healthcare service to be delivered, there should be one doctor for every six hundred medical patients. currently in Nigeria, the figure is one doctor for every five thousand patients. towards addressing this anomaly, a public hearing has held for the federal university of health science Otukpo establishment bill 2017, aimed at boosting service delivery and reducing brain drain.

The non-uptake of social health insurance programme by states is one of the factors said to be militating against the implementation of a sustainable health insurance system in Nigeria and the attainment of universal health coverage. to chart the way forward, on states take ownership, the national health insurance scheme commend a forum for state commissioner for health and other key players in Owerri the Imo state capital.

The Academic staff union of Polytechnics  has resolved to resume an indefinite strike from the 13th of November over non implementation of agreements. the union which claimed that despite the approval by president Buhari for the payment of shortfall in personnel allowances of federal workers, two months ago, only five out of twenty-five federal polytechnics have been paid, while none has received promotion arrear after their NEC meeting held in Abuja, ASUP wants government’s quick intervention to save polytechnics education from total collapse. ASUP is also worried about the delay in the non-passage of the amendment bill of the polytechnics act which lapsed with the 6th and 7th assemblies and is under threat of going the same way in the current legislative assembly.

After identifying some major challenges confronting the extractive sector in Africa, an implementation document to ensure success in the sector is underway as geological agencies in Africa and the European union are fine-tuning critical issues. Mie Ogidi reports that the geological surveys training programme is holding in Abuja.

The Buhari friends organization network has a big catch as a former PDP chieftain and former Bauchi state governor, Mallam Isah Yuguda joins the group promising to work for the success of the Buhari Administration.

The Nigerian air force says it is determined to destroy all Boko Haram hideouts with intensive day and night aerial bombardments. Director of public relations and information, air commodore  Olatokunbo Adesanya revealed this in a statement to sensitize the public to operations of the Nigerian air force. Air Commodore Adesanya recounted that in the closing stages of operation Ruwan Wuta ii, the Nigerian air force conducted an air interdiction mission on a blue-roofed structure in Talala a Boko Haram infested location in Sambisa, consequently a NAF fighter aircraft was scrambled to attack the building which led to a battle damage assessment revealing that that the building and its occupants were  neutralized as a result of the air strike. The operation Ruwan Wuta ii was initiated to further decimate the ability of Boko Haram terrorists to freely operate with a view to giving advantage to security forces to frustrate their efforts.

The minister of science and technology, Dr. Ogbonnaya Onu says a national science, technology and innovation roadmap has been put in place to stimulate an industrial revolution in Nigeria. Dr.Onu was speaking at a lecture to course 26 participants of the National Defence College, Abuja.

ECOWAS member states are working towards the conformity of products from the sub-region to enhance competitiveness for exports. This is to boost international acceptability of goods and products as well as eliminate technical barriers to trade. Justin Bem Unyi reports on the consultative meeting on ECOWAS regional accreditation system and committees in charge of quality. conference on fraud in public service Internal Auditors in Nigerian tertiary institutions are poised to institute a framework to checkmate fraud in the Nigerian Universities in furtherance  of the fight against corruption. consequently, a conference on fraud in public sector  focusing on the role of internal auditors is under way in Abuja.