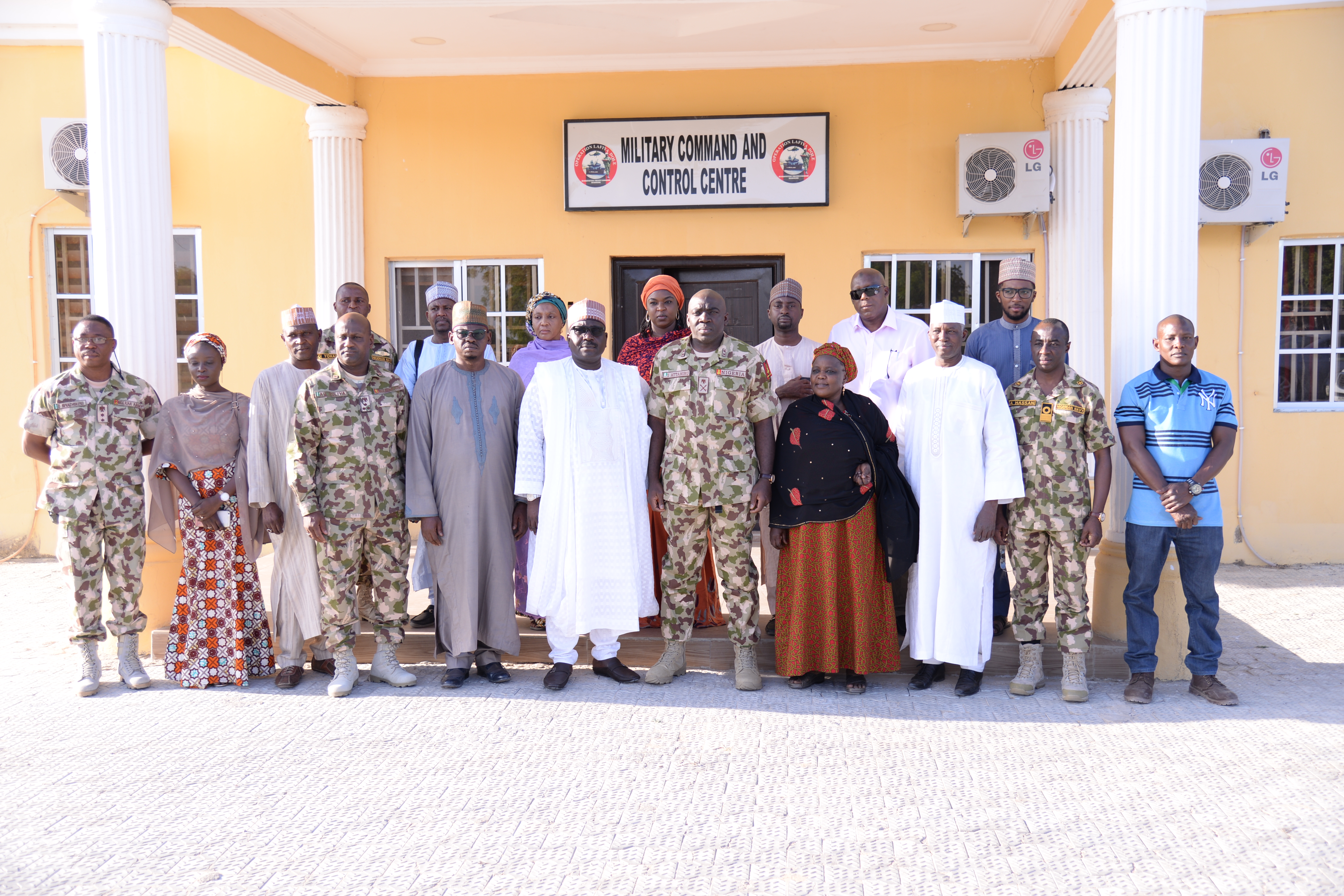 The Presidential Committee on the North-East Initiative led by the Vice Chairman Tijjani M. Tumsah, visited the Theatre Commander of Operation Lafiya Dole Major General Ibrahim Attahiru. Tumsah said the familiarization tour was coming on the heels of the theater commander’s resumption at as the helmsman of the command. He also used the opportunity to update him on the PCNI’s monthly coordination forum for representatives of the North East’s security architecture. In his remarks Tumsah stated that the PCNI was seriously concerned about the proliferation of informal camps especially as the agency was moving towards livelihood restoration. He also stated that the PCNI was still committed in the clearing of trees and foliage to reduce the cover of the insurgents. The PCNI has also made a commitment to incorporate widows into the livelihood support programs of the agency in the coming new year. He ended the address by thanking Operation Lafiya Dole for their gallantry.

From November 2 – 3, PCNI, in collaboration with the World Bank, hosted a North-East Recovery and Stabilization Program prioritization and sequencing Workshop. The workshop focused on Gombe, Taraba and Bauchi States. It brought together a range of partners and stakeholders including focal persons from the states, the African Development Bank and the World Bank. The state focal persons were trained on prioritization and sequencing methodology based on the Buhari Plan and the RBPA. The event was designed to follow the strategic focus on Borno, Adamawa and Yobe with the operationalization of the Buhari Plan’s programmes for Gombe, Taraba and Bauchi. While the BAY states bore the brunt of the conflict, the non-BAY states have also been indirectly impacted especially by the influx of internally displaced persons and the resultant pressure on social infrastructure.

The Presidential Committee on the Northeast Initiative (PCNI) will partner with Borno Social Media Frontiers (BSF), an internet based organization in Borno State. The PCNI Vice Chairman, Mr. Tijjani Tumsah, made this pledge when the organization paid him a courtesy visit at the Borno state PCNI office, in Maiduguri on Friday 3rd November 2017.
BSF is a Maiduguri-based internet advocacy that works to promote the image of Borno State, countering negative narratives coming out of the state and to foster unity among the youth of Borno through Social Media. The BSF delegation was led by its coordinator who also serves as Special Assistant (State and National Welfare programs) to the Governor of Borno State, Mr. Habu Kale Tijjani. Tumsah commended the group for the work it has been doing by providing counter- narratives to negative information coming out of Borno and the Northeast. He remarked that as an indigenous group, the work of BSF is important not only to Borno but to all youth across the nation. He urged the BSF to continue its engagement and promised to partner and support the organization both with human resource training, the provision of equipment and the sourcing of scholarships to build its capacity.

The Borno State Government is presently developing strategies to ensure that the Internally Displaced Persons (IDPs) in the state return to their communities before the first quarter of 2018. This was disclosed by the Deputy Governor of Borno, Usman Durkwa, says in Maiduguri on November 5. The Deputy Governor said that there were still a handful of camps within the state hosting the IDPs, but that it is expected that IDPs will be returned to their communities early next year. Durkwa commended the Federal Government in ensuring improvement in the living standard of the IDPs.

Federal Government to aid Universities affected by Insurgency
President Muhammadu Buhari said the Federal Government would support universities affected by the Boko Haram insurgency in the North East. He disclosed this on Saturday at the 23rd Convocation of Modibbo Adama University of Technology (MAUTECH), Yola. Buhari, who was represented by Professor Salihu Abdullahi, said the government would provide a special fund to MAUTECH to enable it to complete some vital projects.
The President said that the federal government identifies with the institution and is committed to supporting and intervening in the affected universities as we do in the other lower levels of education. To this end, he said, the government will provide a special fund to finance the completion of the university’s perimeter fence and connect its major facilities with good roads on campus. Funds will also be made available for the construction of additional female hostels so that a larger number of ladies can be safely and properly accommodated.

From November 2 – 4, the Lake Chad Basin Commission and the African Union Commission including the Republic of Benin, hosted a conference with the theme “Supporting the development of a framework for a Regional Stabilization Strategy for areas affected by Boko Haram” with the ultimate goal of developing a regionally applicable and acceptable policy proposal on stabilization, reconstruction and development in the areas affected by the insurgency in the Lake Chad Basin region. Invited participants were from different organizations including experts from the Troops Contributing Countries (TCC) of the MNJTF namely Nigeria, Chad, Cameroun and Niger, INGOs, NGOs, Humanitarian organizations, Civil Societies, the World Bank, African Development Bank, Representatives from the IDPs in the member countries, as well as a repentant Boko Haram member to provide contexts from different backgrounds. The Conference was driven by the need to utilize the progress made by the Multinational Joint Task Force (MNJTF) in the fight against the terrorist group to develop strategies for handling the post operation era. Various reports underscored the multifaceted nature of the interventions required by the Lake Chad region, and the need to address the underlying drivers and motives of armed groups in the region.

The Conference sought to develop a clearly thought out framework for a comprehensive strategy on community, national and regional levels, with a view to ensuring coherence between and among actors involved in stabilization efforts in the region. The conference involved a mix of plenary sessions and working group sessions, with experts breaking out into respective thematic groups. The LCBC and MNJTF leaderships provided progress reports on their activities in implementation of the MNJTF mandate at both political and military levels, and their capacities to support national and international stabilization efforts in the region. There were also presentations from member states and RECs (ECCAS and ECOWAS) on current activities, experts’ presentation of regional strategies based on their experiences in the continent and elsewhere. The event also featured sharing of experiences, best practices with lessons learnt from national and regional contexts.