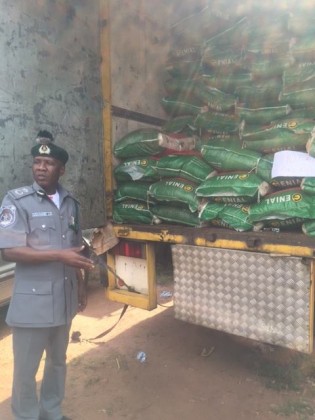 Ahmad, represented by the command’s Spokesman, Mr Magaji Mailafiya, told the News Agency of Nigeria (NAN) on Thursday that the seizures were made last week Thursday and Friday along Illela-Sokoto road.

Ahmad said the seized trucks belonged to Dangote Group, while the duty paid value of the 50kg bags of rice was N8.7 million.

He said the foreign rice were among the items prohibited from entering the country through land boarders, adding that the action contravened Federal Government’s fiscal policy on rice importation

He said that the contraband rice were arrested as a result of the vigilance of his men on border patrol.

“The contraband has a Duty Paid Value of N8, 748,320 and the two suspected importers along with the contraband items were arrested.

“They are in our custody and will soon be prosecuted accordingly,” Ahmad said.

He urged Nigerians to complement government’s efforts on rice cultivation and other agriculture development programmes by establishing processing industries  geared toward viable economic development in the country.

He enjoined individuals, traditional and community leaders as well as groups to assist government to achieve “smuggle-free” society.