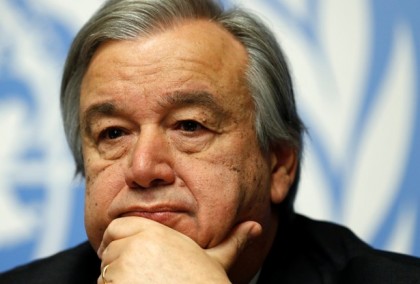 The United Nations has commended the good relations between the Executive and the 8th National Assembly as exhibited by the lawmakers at the joint session of the National Assembly on Tuesday, during the presentation of the 2018 Budget by  President Muhammadu Buhari.
The Special Representative of the Secretary-General (SRSG) and Head of the United Nations Office for West Africa and the Sahel (UNOWAS), Dr. Mohammed Ibn Chambers, gave the commendation when he visited the President of the Senate, Dr. Abubakar Bukola Saraki, in Abuja on Wednesday.
The former ECOWAS boss, according to a statement by the Chief Press Secretary to the President of the Senate, Sanni Onogu, in Abuja, said the excellent collaboration between the executive and the legislature augurs well not just for the stability and peace of the country, the ECOWAS subregion and indeed, Africa in general.
He said that the visit to the leadership of the National Assembly was part of the UN’s consultation with relevant stakeholders as the country prepares for the 2019 general elections.
Chambers said: “First and foremost, allow me, Mr. President, to express our appreciation and indeed our admiration for what we witnessed yesterday (Tuesday), during the joint session of the National Assembly to receive the budget statement of the President of the Republic and indeed the very collaborative atmosphere that characterized that important constitutional exercise by the President of the Republic.
“We all know that when such collaboration exists between these two key arms of government, it augurs well for Nigeria and by extension the West African subregion and indeed Africa as a whole.
“The UN Secretary General has always admired the leadership of this country and that leadership is a shared leadership by the Executive, the Legislature and of course the Judiciary and other civil societies and important stakeholders.
“Therefore, what we witnessed was truly admirable and we want to you commend you as leader of Senate and leader of the National Assembly for that,” Chambers said.
In his response to the remarks of the UN Scribe, Saraki stated that the National Assembly, irrespective of party affiliations, will continue to “work closely” with the executive to enable the President achieve his developmental agenda for the overall benefit of Nigerians.
“We are always ready to work very  closely with the executive,” Saraki said. “We are partners in progress and we believe that the success of the administration would truly depend on the collaboration between the two arms of government and we have both seen that sense of responsibility.
“We are all committed across party lines in the National Assembly and we will work with Mr. President for the success of the administration and for him to be able to deliver on his promises and to be able to do that we must be able to work very closely together.
“What you saw yesterday (Tuesday) is really an indication of what you will see from now going forward so that some of those promises we need to address and bring to fruition will happen,” Saraki stated.