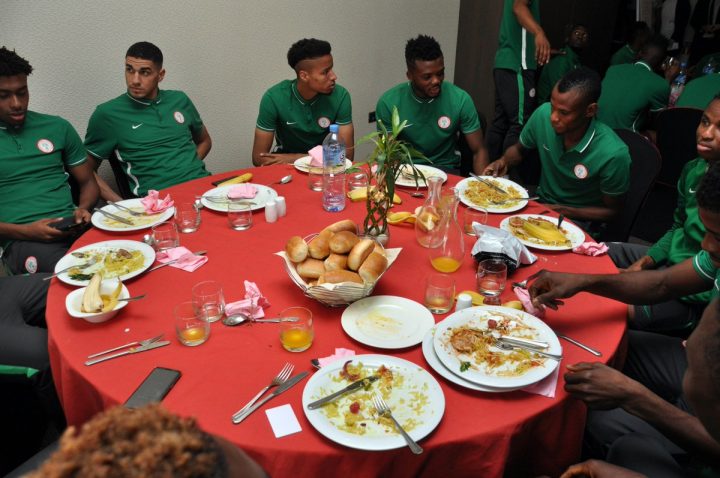 Nigeria’s Super Eagles go up against the Fennecs of Algeria in Constantine on Friday with a determination to finish the 2018 FIFA World Cup Russia qualifying campaign unbeaten.

Technical Adviser Gernot Rohr and Skipper Mikel John Obi said this much on Thursday evening, as the squad welcomed Nigeria’s Ambassador to Algeria, His Excellency Demenongu Agev at the Hotel Novotel in Constantine.

“We already have the FIFA World Cup ticket but we have prepared for this match in the same way we prepared for the previous matches in the qualifying series,” said Rohr.

Skipper Mikel Obi, who will win his 80th cap for Nigeria if selected to play at the Stade Mohamed Hamlaoui, said the team is focused on finishing the race without a loss.

“We don’t want to lose any match; we will go to the field looking for a win. Matches between Nigeria and Algeria are always big, and we cannot afford to take things for granted.”

Earlier, Ambassador Agev told the players that Nigeria as a whole is proud of their service to the nation and that they remain role models for even Nigerians in the diaspora.

“Your great service to our dear country is always appreciated. Our qualification for the FIFA World Cup made even those of us here in Algeria to be very proud, and many Algerians are looking forward to seeing you on the field tomorrow.

“They know they have lost the World Cup ticket, but even those who work with us in the Embassy have told us they will support the Super Eagles during the World Cup in Russia,” said Ambassador Agev, who welcomed and drove with Nigerian officials from Algiers to Constantine on Thursday.

The Super Eagles’ delegation flew from Rabat to Constantine on Thursday aboard a chartered aircraft, arriving at some minutes afternoon. The team was received on arrival by officials of the Nigerian Embassy, officials of the Algeria Football Federation and NFF official Aliyu Lawal Ibrahim.

In the evening, the Eagles had their only training at the Stade Mohamed Hamlaoui, where Friday’s match will take place, starting at 8.30pm Algeria time (same as Nigeria).

NFF 1st Vice President Seyi Akinwunmi led the delegation of officials who traveled from Lagos and through Casablanca and Algiers before connecting by road to Constantine.

Ambassador Agev, Head of Chancery Olusegun Oladele and some officials of the Nigerian Embassy were at the airport in Algiers to receive them and rode with them on the same bus to Constantine. There were also officials of the Algeria Football Federation.