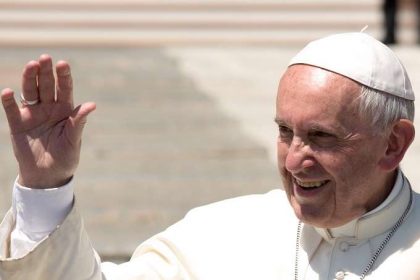 Pope Francis has offered “prayerful solidarity” to victims of the earthquake which killed more than 400 people in a border region between Iran and Iraq.

A Vatican statement noted that `Francis was deeply saddened by news of the earthquake and assured all affected by this tragedy of his prayerful solidarity.

“He (Pope) offered prayers for the deceased and commended them to the mercy of the Almighty.

Upon the injured and the emergency and civil authorities engaged in rescue and recovery efforts, His Holiness invoked the divine blessings of consolation and strength,” the vatican statement added.

More than 400 people were killed in Iran when a magnitude 7.3 earthquake jolted the country, state media said on Monday, and rescuers were searching for dozens trapped under rubble in the mountainous area.

State television said more than 407 people were killed in Iran’s deadliest earthquake in more than a decade and at least 6,600 were injured.

The earthquake, which struck on Sunday, was felt in several western provinces of Iran but the hardest hit province was Kermanshah.

Iranian state television said the quake had caused heavy damage in some villages where houses were made of earthen bricks.

Rescuers were labouring to find survivors trapped under collapsed buildings. At least 14 provinces in Iran had been affected, Iranian media reported.

Iranian Supreme Leader Ayatollah Ali Khamenei offered his condolences on Monday, urging all government agencies to do all they could to help those affected.

Iran sits astride major fault lines and is prone to frequent tremors. A magnitude 6.6 quake on Dec. 26, 2003, devastated the historic city of Bam, 1,000 km southeast of Tehran, killing about 31,000 people.

Electricity and water was cut off in several Iranian and Iraqi cities, and fears of aftershocks sent thousands of people in both countries out onto the streets and parks in cold weather.