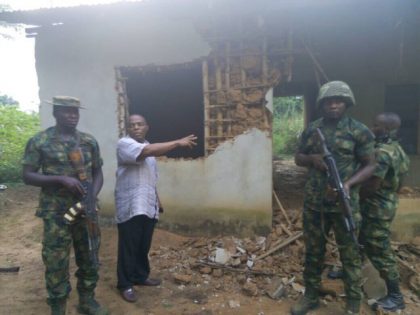 The Nigerian Army says it has apprehended three suspected members of the proscribed Indigenous People of Biafra (IPOB) for being in possession and sharing leaflets inscribed: “No Election in Anambra”.

The Deputy Director, Army Public Relations 82 Division, Col. Sagir Musa, disclosed this in a statement made available to newsmen on Tuesday in Onitsha.

Musa said the suspects were arrested by the 144 Battalion patrol team at Alaoji flyover, Aba General Area, on Nov. 12.

“The suspects, leaflets and flyers have been handed over to Department of State Services (DSS), Abia Command, for further action,” Musa said.

Similarly, Musa said a joint patrol team of 145 Battalion Rear and some personnel of the National Drugs Law Enforcement Agency (NDLEA) had also recovered large quantity of substances suspected to be cocaine and hemp.

He said three suspects were arrested and had been handed over to the NDLEA along with the exhibits for further action.

Musa also disclosed that a patrol team of 144 Battalion of 14 Brigade Nigerian Army had rescued the General Overseer of Victorious Peoples Assembly, Aba branch, Mr Michael Onyeka, who was kidnapped on Nov. 10.

According to him, the Cleric was rescued on Nov. 12 following a tip-off received from a good Samaritan indicating the possible location where he was held.

He said that no arrest was made as the culprits ran away before the arrival of the troops, but that efforts were being made to apprehend them. (NAN)