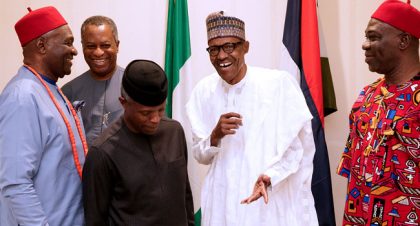 President Muhammadu Buhari has assured the people of South-East that his administration will ensure timely execution of roads, power and other projects in the region.

Addressing Ebonyi State Leaders of Thought and Traditional Rulers at a meeting in Government House, Abakiliki, Ebonyi, the President commended Ebonyi people for the warm reception accorded him during the state visit.

He said that his visit to the state was clear demonstration of his administration’s strong belief in the unity of Nigeria.

He added that “my presence here today is a demonstration of our strong belief in the unity of Nigeria.

“As the most populous country in Africa, with over 300 ethnic groups, our diversity is unique among nations.

“When I met with leaders from the South East last month in Abuja, they raised several issues of concern, including the state of the roads and infrastructure in the region. I want to assure you that we will deliver on our promises.

“Our 2018 budget includes many strategic projects for the region in the roads, power, agriculture and other sectors.’’

The News Agency of Nigeria (NAN) reports that President Buhari had earlier inaugurated the 14.5km Abakiliki-Afikpo Federal road constructed by the Ebonyi Government.

He also inaugurated the 700-metre dual flyover over the Trans-Sahara route, running from Enugu to Cameroon, and the Sen. Offia Nwali flyover, all in the state capital.

President Buhari also performed the foundation-stone laying ceremonies of Ebonyi City Mall, another flyover and road tunnel named after him.

He unveiled the statue of Sir Akanu Ibiam, former Governor of the old Eastern region, whom he described as “a great Nigerian, whose notable records of humanitarianism, advocacy of free primary education and rural development, will continue to be an inspiration to all.’’

President Buhari, who commended Gov. David Umahi for ”his vision and commitment to the development of the state,” also thanked traditional rulers in the state, led by Eze Charles Mkpuna for conferring him with the chieftaincy title of Enyioma 1 of Ebonyi (Trustworthy friend of Ebonyi).

At another event with South East traditional rulers led by Eze Eberechi Dick, the President was conferred with the chieftaincy title of Ochioha Ndigbo (Leader of Igbo people).

He also called for urgent intervention by Federal Government to curb intra-communal clashes, as well as cross-border disputes in the region.(NAN)