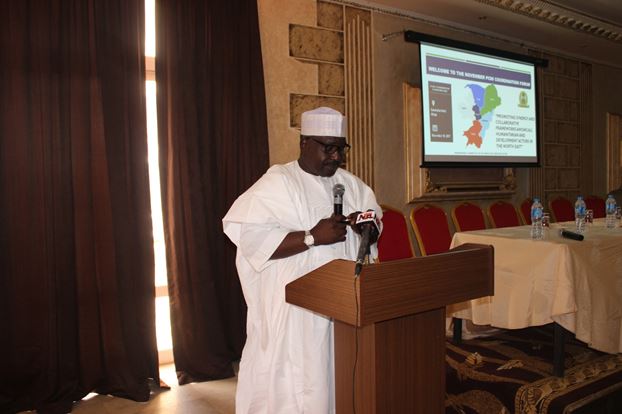 In 2018, the Presidential Committee on North-East Initiative (PCNI) will focus on humanitarian response, empowerment and economic development. This was disclosed by the PCNI Chairman, Lt. Gen. Theophilus Danjuma (rtd), on November 10, in Abuja during the fifth monthly coordination forum with stakeholders. Danjuma, who was represented by the Vice Chairman, Tijjani Tumsah, said that PCNI’s strategic focus in 2018 was aimed at ensuring early recovery and normalization in the North East through agriculture and economic development. The shift in emphasis accompanies what is expected to be a broader move from humanitarian emergency response to sustainable recovery and development with the former expected to be increasingly de-emphasized in favour of the latter. While delivering an end of year assessment of the monthly coordination forum, the Chairman remarked that the forum had addressed duplication of efforts among stakeholders and closed the gap in information sharing between government MDAs, State Governments, donors, partner and CSOs thereby achieving synchronization and sequencing of responses in the process. He noted that the forum has also facilitated waivers and access for donors and partners. The Chairman expressed his appreciation to the state governments, federal agencies, departments and ministries, CSOs, the International Community, the UN system in Nigeria, the private sector and all other stakeholders for their roles in facilitating the reconstruction and rehabilitation of the North-East. The November coordination meeting will be the last for the year.

WHO reaches 5 million People in the North-East

In 2017, the World Health Organization (WHO) has reached 5 million people in the north-East through a broad range of interventions that include primary healthcare, antenatal care and vaccination among others. This disclosure was made by Dr. Martinez Jorge of WHO at a panel discussion during the 5th monthly coordination forum. The discussion featured representatives of various actors currently operating in the North-East including the World Health Organization, the World Bank, the National Directorate of Employment and the Nigerian military. The conversation highlighted operational challenges faced by the actors during the year as well as progress made and their plans for 2018.

Dr. Jorge described the North-East as a “Pandora’s box of disease outbreaks” with epidemics of cholera, measles, and Lassa fever having surfaced during the year. After two years of being Polio-free, the North-East recorded cases of polio in 2016, but no case was recorded in 2017. He also noted that more than 60 percent of health facilities in the region are degraded as a result of the insurgency and the health sector still suffers from severe manpower shortage and requires huge numbers of doctors and nurses. Dr. Jorge stressed that the movement of unvaccinated populations within the area was also adversely affecting the epidemiological profile of certain areas. In response, WHO has established a surveillance programme for the timely identification and diagnosis of ailments. Malaria has been flagged as the leading cause of morbidity and mortality however health interventions recorded a 60 percent decrease in Malaria-related morbidity. To combat cholera, the WHO chief said that interventions would have to emphasize water, sanitation, hygiene and social mobilization.

World Bank to escalate Interventions in the North-East

In the course of 2017, the World Bank has been focused on getting international financial institutions to align with the Buhari Plan and the RBPA. According to Mr. Howard Bell of the World Bank, over the past year, the Bank had emphasized creating a policy framework for long-term sustainability of recovery, developing a methodology for prioritization, deepening institutional arrangements and structures for interrelationships such as PCNI’s coordination architecture, securing sustainable financing and creating a monitoring and evaluation structure. Mr. Bell was speaking as a representative of the World Bank at the Monthly Coordination Forum. He said IFIs have committed roughly over a billion dollars to recovery efforts in the North East although these packages are still being worked on. Bell said that although the World Bank is not a humanitarian agency, it had nonetheless involved itself as much its mandate would allow in the process of developing the 2018 Humanitarian Response Plan. In 2018, the World Bank will confront the challenge of implementing large, complex, and multifaceted projects in the North-East. Mr. Bell called for an evolution of the PCNI coordination forum and a deepening of multilevel strategic interaction between the various actors. He also highlighted the challenge of relations between the federal government and the state governments which are crucial to the successful implementation of interventions.

The Federal Government has approved the implementation of the United Kingdom-Department for International Development (UK-DFID) £46 million North-East Humanitarian Response Programme. It said this in excerpts of a book entitled “Making steady sustainable progress for Nigeria’s peace and prosperity: a midterm scorecard on the President Muhammadu Buhari’s administration.” The book was presented to the public on November 16 in Abuja, was sighted by newsmen. Authored by the Presidential Media Team, it is a documentation of the notable achievements of the Muhammadu Buhari-led administration since its inauguration on May 29, 2015. The Federal Government also approved the implementation of UK-DFID’s Anti-Corruption in Nigeria (ACORN) programme and the Partnership to Engage Reform and Learn (PERL) programme in £57.5 million.

According to the book, implementation of all agreements between the federal government and bilateral/multi-lateral development partners are being strictly monitored to ensure alignment with national development priorities and aspirations. It has also signed financing agreements with the European Union (EU) for the implementation of EU support strengthening resilience in Northern Nigeria for £42 million from next month to December 2019. Other programmes for implementation are USAID supported programmes towards broadened and inclusive growth, a healthier, more educated population and strengthened good governance to cost $702 million.

The Aliko Dangote Foundation will invest US$100 Million over five years to tackle malnutrition in the North East and North West, the worst-affected parts of Nigeria.

Zouera Youssoufou, Managing Director and CEO of the Aliko Dangote Foundation made the pledge at the recently concluded Global Nutrition Summit in Milan Italy, which was also attended by Aliko Dangote himself. “Nigeria’s high malnutrition rate is undermining progress towards improving child health and survival and putting the brakes on economic development,” she said. “By investing in nutrition, we aim to directly improve the lives of Nigerian families and to empower our citizens to reach their full potential.”

The summit on 4 November gathered a broad range of governments, international agencies, foundations, civil society organizations and businesses. It was convened with the objective of taking stock of nutrition commitments made to date, celebrating progress toward global goals on nutrition, and announcing additional commitments to accelerate the global response to malnutrition in all its forms. Nigeria boasts not only Africa’s largest population but also the continent’s highest numbers of malnourished children. Almost half of the one million children who die before the age of five in Nigeria, die of malnutrition as the underlying cause.

The Aliko Dangote Foundation is on a mission to reduce the prevalence of under nutrition by 60 percent in the neediest areas of Nigeria, specifically the North East and North West, where malnutrition has affected millions of lives and crippled the local economy. With this US$100 Million commitment, the Aliko Dangote Foundation will promote scalable and cost-effective nutrition interventions such as breast feeding, healthy sanitation practices, disease prevention, food fortification and supplementation. These activities complement other long-term programs on education, empowerment, food security, water, sanitation and health care.