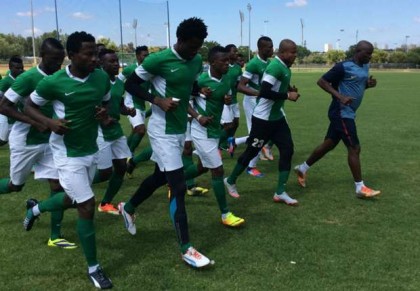 Nigeria will face 2014 champions Libya,as well as Rwanda and Equatorial Guinea, in the group stage of the 5th African Nations Championship (CHAN) in Morocco.

The News Agency of Nigeria (NAN) reports that the competition is holding from Jan. 13 to Feb. 4, with the Eagles playing their Group C matches in Tangier.

Libya had shocked all by winning in South Africa at the expense of Ghana, in spite of the North African nation being embroiled in political turmoil at the time.

Nigeria had finished third at the 2014 competition, and will need to be wary of them this time around, after late Friday’s Draw Ceremony in Rabat has now paired them.

Rwanda were the last team to qualify for the 2018 finals, edging Ethiopia 3-2 on aggregate in a play-off after Egypt decided to forfeit its slot at the championship.

Hosts Morocco, Guinea, Sudan and Mauritania have been drawn in Group A.

The Atlas Lions will be facing Mauritania in the competition’s opening match at the Mohamed V Stadium in Casablanca on Jan. 13.

Hosts of the inaugural edition of the competition in 2009, Cote d’Ivoire, head Group B which will be based in Marrakech, and have Zambia, Uganda and Namibia as group mates.

Group D, based in Agadir, has 2011 runners-up Angola, Cameroon, Congo and Burkina Faso.