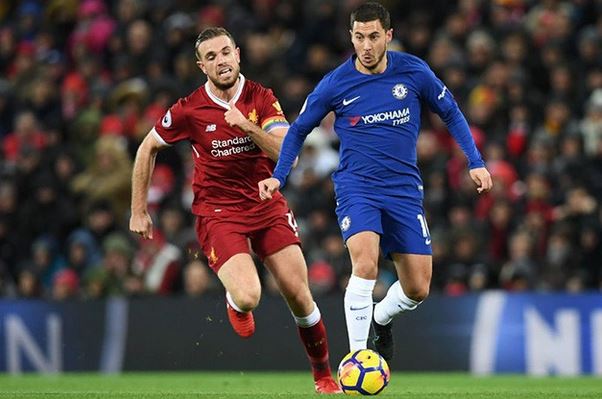 Willian struck five minutes from time to earn the Blues a thoroughly deserved point at Anfield.

The Brazilian, a scorer twice in midweek, had not been on long when he lobbed Simon Mignolet from a tight angle wide on the right.

It was the least we merited following a spirited display that came hot on the heels of a long midweek European trip. There were few signs of tiredness as we pinned Liverpool back in the final 20 minutes as they tried to hold on to a lead given to them by Mohamed Salah midway through the second half.

We had shaded the chances until then, and we passed up a couple more up before Willian’s excellent leveller arrived late on. It was a fitting finale to a well-contested game of elite Premier League football.

Conte opted to make one change from his last Premier League selection, bringing Danny Drinkwater in for Cesc Fabregas. It was the former Leicester man’s first league start for us, and he lined up on the right side of a midfield three.

For Liverpool, Alex Oxlade-Chamberlain and former Blue Daniel Sturridge both started, which meant places on the bench for Roberto Firmino and Sadio Mane.

Salah and Eden Hazard signalled their attacking intent with a couple of early trademark bursts forward, and from our first corner, not fully cleared, the Belgian volleyed a dangerous cross that wasn’t far away from finding a blue shirt. The retreating Andreas Christensen mopped up inside our half to stop the ensuing counter.

Salah had the first shot of the game, curled harmlessly wide. Down the other end, Hazard with his twinkle toes and turn of pace looked the likeliest to create an early opening for us. He was the subject of plenty of rough treatment from Liverpool throughout as they tried to stop his progress.

Midway through the half, it was Hazard who plucked a fine Drinkwater pass out of the sky wide on the left, cut inside and forced his compatriot Simon Mignolet into a good low save.

We didn’t have to wait long for more magic from Hazard. Twisting and turning on halfway, he cutely slipped Drinkwater in but the no.6 couldn’t quite force the ball past Mignolet.

Hazard’s next act was to tee up the charging Davide Zappacosta, whose rising first-time drive from the angle of the 18-yard box required Mignolet to tip over. An almighty goalmouth scramble ensued from the resulting corner. Alvaro Morata nor Gary Cahill could turn it in as legs frantically swiped at the ball before Drinkwater had a cleanly-struck effort blocked.

Christensen got in the way of a Salah poke goalwards but aside from that, the Blues were well on top now. Marcos Alonso was the next to go close for us with a bending free-kick that flew past Mignolet’s left-hand post.

A neat move involving Tiemoue Bakayoko, Morata and Alonso ended with the latter expertly picking out Zappacosta, whose cross was kicked behind by Henderson. Then Salah created a yard from himself on the edge of the 18-yard box and curled not far wide. It was the final meaningful action of a thoroughly entertaining half in which he and Hazard had been the stars.

The Belgian had a penalty appeal waved away when play restarted, although it looked like there had been significant contact between him and James Milner.

We had a let-off on 50 minutes when Sturridge, hitherto quiet, saw his low cross squirm through Thibaut Courtois’ grasp. Thankfully it dribbled past the post.

Our keeper did better racing off his line to reach the ball before Oxlade-Chamberlain and then delicately handle it inside his box.

Either side of the hour, we had our best two moments yet this half, both stemming from Zappacosta crosses wide on the right. The first evaded the raiding Azpilicueta and then Morata miscued at the far post; the second reached the striker again, via a deflection, but he couldn’t direct it on target at an awkward height.

We were made to pay on 65 minutes. When Bakayoko wasn’t able to gather a short Coutinho pass in the D, Oxlade-Chamberlain found Salah first time and the Egyptian slipped his shot under Courtois. How would the Blues react to conceding our first league goal in over six hours of football?

A couple of ricochets didn’t fall our way in the heart of the Liverpool box – Zappacosta crosses again causing problems – before Conte mixed things up by bringing on first Cesc Fabregas and then Pedro, the latter for his 100th Chelsea appearance. Drinkwater and Bakayoko made way.

Cahill, Chelsea captain for the 50th time, blocked crucially from Liverpool sub Georginio Wijnaldum, and as the game continued to open up a stunning long Fabregas pass nearly set Alonso away. The Spaniard did reach yet another good Zappacosta cross, but, unmarked, he could only volley well over.

But we didn’t let that miss affect us and kept pushing forward as our hosts sat deeper and deeper. The reward arrived with five minutes of normal time remaining.

Willian had only been on the pitch a couple of minutes when he dug out a cross-shot that looped perfectly over Mignolet and snuck into the far corner, sparkling delirium in the away end behind that goal. 1-1.

Morata nearly picked out Hazard as we sought an instant second, and then as we rolled into added time, Courtois dived at full stretch to push a Salah shot wide.

So 1-1 it finished and Chelsea unbeaten run at this ground extends to a sixth game. The Blues now have five without defeat in the Premier League and have a chance to keep the positive momentum going when they host Swansea City on Wednesday.