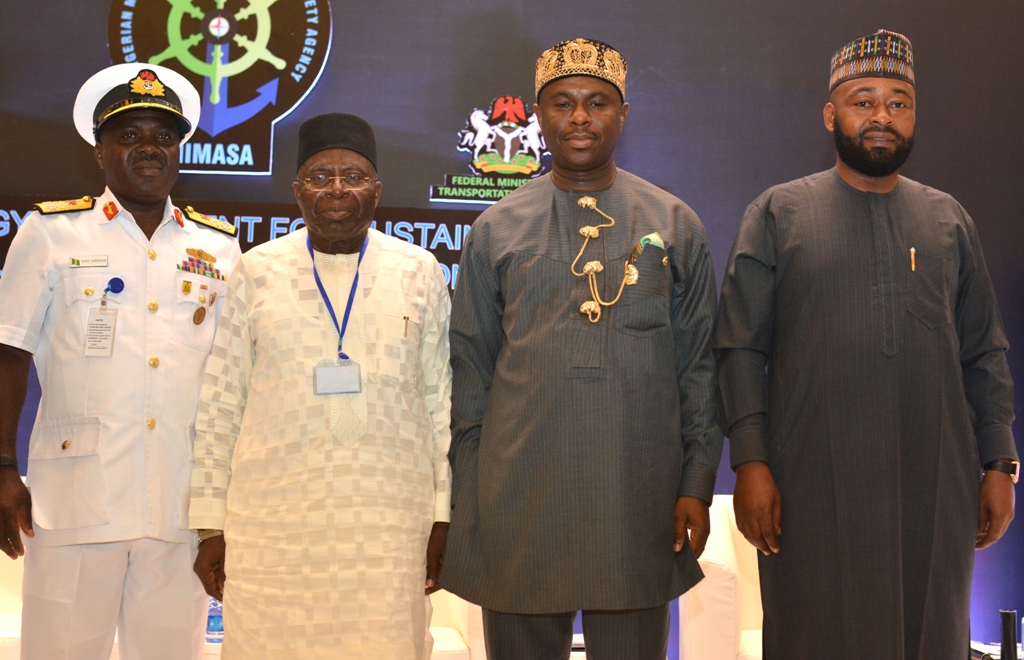 Stakeholders in the Nigerian maritime industry have opposed moves by the Nigerian Navy seeking amendment to the Nigerian Maritime Administration and Safety (NIMASA) Act to contribute 1% of its revenue to the Nigerian Navy. Isichei Osamgbi, Head, Corporate Communications,
NIMASA
The move was condemned by industry players during a One-Day Public Hearing on “A bill for an Act to Amend the Nigerian Maritime Administration and Safety Agency Act, No. 17 2017 to increase the functions of the Agency; and for related matters (HB; 1131 & 1178), before the House of Representative Committee on Maritime Safety, Education and Administration.
Speaking at the event, the President, African Ship owners Association and a former Director General of NIMASA, Mr. Temisan Omatseye pointed out clearly that it will be against all international conventions of the International Maritime Organization (IMO) entered into by the Federal Republic of Nigeria which has to be implemented.
While citing Section 22 (P) of the NIMASA Act, which provides opportunity for the Agency to provide maritime security, he noted that the IMO frowns at issues of military engagement in commercial activities.
Also lending his voice to condemn the proposed bill, the Chairman, Ports Consultative Council, Otunba Kunle Folarin noted that Nigeria is a critical stakeholder in the international maritime space, hence the need to exercise caution in amending any bill that may jeopardize the future of Nigeria in the global maritime sector.
In his words “NIMASA’s efforts on regional co-operation should be consolidated, rather than trying to usurp some of the functions of the Agency as it will affect the day to day operations of NIMASA in carrying out its mandates”.
He however was quick to caution that the House of Representatives Committee on Maritime Safety, Education and Administration should ensure that NIMASA and Nigerian Navy should not work at cross-purposes as they are both critical to the safety and security of the nation’s territorial waterways.
Meanwhile, the representative of the Association of Marine Engineers and Surveyors (AMES), Engr. Emmanuel Ilori in strong terms also condemned the moves by the Nigerian Navy to usurp the roles of NIMASA by way of seeking amendment to the bill.
According to him, he said that the Cabotage fund should not be raided to fund another Agency of government that already has a budget from the Federal Government. He called on the Navy to seek for more budgetary funding from the right source and not from NIMASA as both Agencies’ have their jurisdiction as regarding budget and expenditure.
“NIMASA is already investing in infrastructure that will lead to a total coverage of the maritime sector, hence the need to encourage them for the good of the maritime sector. At this critical time, it is premature to seek any form of amendment and we need to support NIMASA on this; more so we are going to IMO again and Nigeria must not be an object of ridicule again” Engr. Ilori said.
Other Stakeholders who also condemned the proposed bill include, the President of the Stevedoring Association of Nigeria, Mr. Bolaji Sunmola, representative of the Nigerian Maritime Law Association (NMLA) Mrs. Oritsema Tosa, Lagos coordinator of the Nigerian Ship Owners Association (NISA), Captain Taiwo Akinpelumi, Director General, NISA, Engr. Oliver Ogbuagu, Secretary General, Abuja MoU, Mrs. Mfon Usoro amongst others unanimously called for caution, noting that NIMASA needs more strength in order to be able to carry out its function effectively.
In his comment, the Director General, NIMASA, Dr. Dakuku Peterside noted that NIMASA is a responsible Agency and will always encourage collaborations rather than acrimonies.
The DG who was represented by the Executive Director, Maritime Labour and Cabotage Services, Mr. Ahmed Gambo stated that“it is national interest and issues of global best practices that is top most; it is not an issue of NIMASA versus the Nigerian Navy”.
He used the opportunity to urge the House Committee to take an informed position on the matter before them in the interest of the nation, to consolidate the powers of the Agency, rather than do otherwise.
Earlier in his opening remarks, the Chairman of the House Committee on Maritime Safety, Education and Administration, Hon. Mohammed Umaru Bago observed that the maritime industry is so critical to the nation and its economy in particular that anything concerning its statutory and regulatory framework should be given adequate legislative attention.
The Speaker of the House of Representative Rt. Hon. Yakubu Dogara, who was represented by Hon. Dr. Ossai Ossai, who is also the Chairman of the Committee on Ethics and Privilege, noted that the essence of the Public Hearing is to give everyone an opportunity to air their views and contribute to the legislative process.