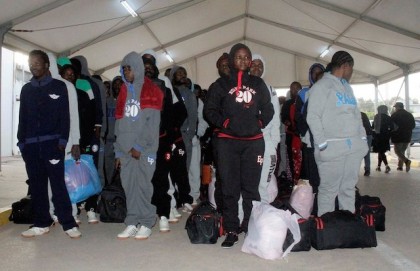 President Muhammadu Buhari on Tuesday night in Abidjan declared that all Nigerians stranded in Libya and other parts of the world will be brought home and rehabilitated.

The President while speaking when he addressed Nigerians in the Diaspora, vowed to reduce the number of Nigerians heading for Europe illegally through the Sahara Desert and the Mediterranean Sea by providing basic social amenities such as education, healthcare, and food security at home.

In an interactive session with members of the Nigerian Community in Cote D’ Ivoire, on the margins of the 5th AU-EU Summit, President Buhari said all necessary steps will be taken to stem the tide of illegal migration by Nigerians.

He, however, noted that it is very difficult to know the origin of the people who died, while attempting the perilous journey across the Mediterranean, because of lack of documentation.

“When it was announced that 26 Nigerians died recently in the Mediterranean, before they proved that they were all Nigerians they buried them.

“But the evidence I have from the Senior Special Assistant on Diaspora and Foreign Affairs, (Mrs. Abike Dabiri-Erewa) is that only three of them were identified as Nigerians. But I’ll not be surprised if the majority of them were Nigerians.

Reacting to a recent footage on the sale of Africans in Libya, President Buhari said it was appalling that “some Nigerians (in the footage) where being sold like goats for few dollars in Libya.’’

‘‘After 43 years of Gadhafi, why are they recruiting so many people from the Sahel including Nigerians? All they learned was how to shoot and kill. They didn’t learn to be electricians, plumbers or any other trade,’’ he said.

On domestic issues, President Buhari told Nigerians in the Diaspora that there is ‘‘good news from home’’ in the area of security, economy and anti-corruption.

“We are not doing too badly in trying to secure the country, improve the economy and deal with corruption.

“We are doing our best at all levels including security. It is absolute madness for people to blow others up in markets, churches, and mosques. No religion advocates violence. Justice is the basic thing all religions demand and you can’t go wrong if you do it,’’ he said.

On food security, the President said that his vision of repositioning Nigeria as a food-secure nation is on course as the country is on the verge of attaining food security.

He attributed the development to positive agricultural reform programmes and bumper harvest occasioned by good weather.

According to the President, interventions through the Anchors Borrows Programme of the CBN and the Presidential Fertilizer Initiative, among others, had been very successful in the agricultural reform initiative.

“People have gone back to the farm. We got the CBN, agriculture minister and money was provided at very low interest to farmers and the farmers responded and it was very positive.

“We are lucky that we are in a position to feed ourselves. So we are going to have food security in Nigeria earlier than anybody ever thought,’’ he noted.

The President advised Nigerians in Cote D’ Ivoire to be good ambassadors in their host country, warning that the Embassy will not hesitate to repatriate those who tarnish the image of the country abroad.