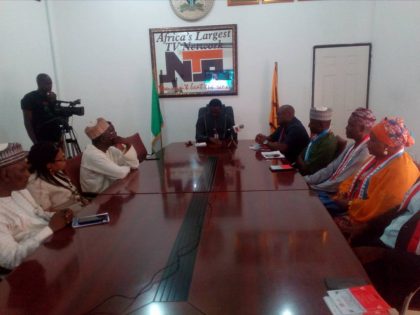 APC Volunteer Group has commended Nigeria Television Authority Management for its contribution on the fight against corruption. The Chairman of its planning committee Amb. Victor Wash Olufemi stated this when he led a delegation of the team to NTA Headquarters in Abuja.

According to him, the National Colloquium on Anti-Corruption organized by the APC Volunteer Group, is committed to ensuring that corruption is eradicated or brought to it’s barest minimum. The Chairman appreciates NTA management for it’s contribution to the fight against corruption

He stated that it is not a Party Affair, but an issue that affects all citizens. The Exec. Director Administration and Training, Dr. Steve Egbo who represented the Director General in his remarks appreciated the group for such laudable initiatives and said the fight against corruption is a fight that must be fought and won for the good of the country.