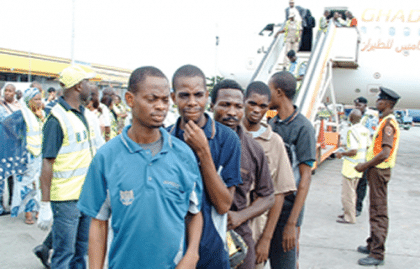 Two days after 401 Nigerians voluntarily returned from Libya, the International Organisation for Migration (IOM) and the European Union (EU) on Friday facilitated the return of 164 more.

The News Agency of Nigeria (NAN) reports that the new returnees arrived at the Cargo Wing of the Murtala Muhammed International Airport, Lagos at about 12.34 a.m.

The returnees arrived in a chartered BURAQ airline with Registration Number 5A-DMG.

They were received on behalf of the Federal Government by the Director-General of the National Emergency Management Agency (NEMA), Alhaji Mustapha Maihajja.

Mahaija, who was represented by the South West Zonal Coordinator of the agency, Alhaji Suleiman Yakubu, gave the breakdown of the returnees as 155 male adults, five female adults and four children and infants.

He thanked the IOM and the EU for their humanitarianism and enjoined the returnees to learn from the bitter lessons they learned in the course of their unpalatable sojourn.

Mahaija charged them to make use of the various schemes being put in place
by the Federal and State governments to reintegrate themselves into the society.

“There’s no place like home and Nigeria is peculiar nation that God has endowed with bountiful resources that everyone can harness and prosper,” he added.

One of the returnees, Mr Emmanuel Keshi, lfrom Delta told newsmen that he dropped out of the University to embark on the perilous journey in August.

Keshi lauded President Muhammadu Buhari for ordering the evacuation of all Nigerians stranded in the volatile North African country.

He said :”I learnt that Buhari has directed the evacuation of all Nigerians from Libya.

“I thank the President for this because the boys (Nigerians) in Libya are really suffering and lacking human rights as they are being treated as animal.

“The President’s directive is very important because of the coming election in Libya.

“I don’t wish to hear that Nigerians are being used as human shield in clashes between the various Libyan groups in case of post-election violence over there.”

NAN reports that the returnees were also received by officials of the Nigerian Immigration Service (NIS) , the National Agency for the Prohibition of Trafficking in Persons (NAPTIP) and the Federal Airports Authority of Nigeria (FAAN). (NAN)