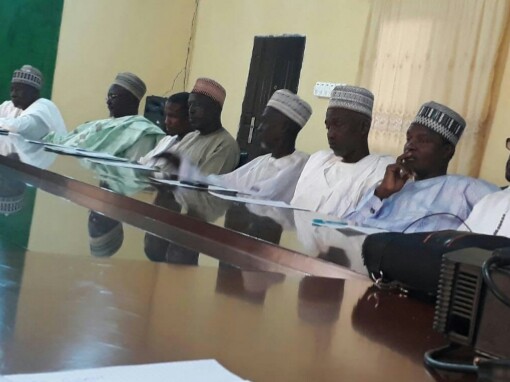 @NePcni Parleys with Representatives and Community Leaders in Yobe

On December 4, the Yobe State Coordination Office of the Presidential Committee on the North-East Initiative (PCNI) held a parley with members of the Yobe State House of Assembly and the Chairmen of the Gujba and Gulani Local Government Areas. The forum was convened to enlighten participants on PCNI’s activities in the state. Gujba and Gulani are among the areas worst hit by the insurgency and recorded major damage to and destruction of public infrastructure and private property including homes, shops, fames and vehicles belonging to residents. They also recorded massive displacement of persons. Recently, the International Organization for Migration (IOM) Displacement Tracking Matrix (DTM) indicated that civilians are now returning to these areas in the wake of the military’s successes. This influx of returnees throws up new set of challenges ranging from shelter, food, health, water, sanitation etc.

The Yobe State Government, through the State Emergency Management Agency is partnering with about nine humanitarian actors in different sectors to provide support for the returning population. The PCNI state office is currently assessing and analyzing gaps in these efforts. The interactive engagement was organized by a civil society organization (Voice and Accountability) with the support of PERL’s Engage Citizens Pillar (ECP), to bring stakeholders together with a view to discussing some of the emerging issues from these returning communities. In attendance were the chairmen of the two LGAs (Gulani, Gujba) and members representing these areas in the State House of Assembly, as well as members of the civil society and the media.

The PCNI state office made a presentation on its activities in the state across all sectors. Specifically included in the presentation, was PCNI’s intervention in the health sector where it donated medical supplies, equipment and ambulances to the Yobe State Ministry of Health. Mention was also made of PCNI’s involvement in the fight against Viral Hepatitis, where it co-sponsored screening and vaccination and recently secured the procurement of a viral load machine-the first of its kind in the entire northeast.

The gathering was also informed of PCNI’s efforts to attract the assistance of the private sector to recovery efforts in the North-East. As part of these efforts, PENCOM recently toured two communities in the state where it intends to build ten classrooms as part of its corporate social responsibility program. The representatives from Gujba and Gulani urged PCNI to expedite completion of ongoing projects in their locales and thereby hasten the resettlement of returnees. The PCNI team fielded questions regarding areas of intervention and avenues of partnership. The PCNI State Programme Manager highlighted the good working relationship between the state office and the Yobe state government.

4,000 Nigerian Refugees return from Niger Republic about 4,000 Nigerian refugees who fled their homes at the peak of insurgent attacks have returned home from Niger Republic in the past one month. This was disclosed by the United Nations Office for the Coordination of Humanitarian Affairs (UN-OCHA) in its North-East Humanitarian Situation Report. According to the report the returnees were registered in various locations in Borno State for the month of October. The fact sheet showed that 1,470 returnees were registered at Gwoza; 498 Kukawa, 374 Ngala and 250 persons recorded at Dikwa.

According to UN-OCHA, humanitarian organizations had mobilized and provided shelter and clothing items for the returnees. With the end of the rainy season, humanitarian bodies had also scaled up activities to provide emergency shelter to the displaced persons in Monguno 2,560 persons; Damboa 2,075; Bama 2,000; Gwoza 1,560; Kala-Balge 1,000; Mobar 975; Dikwa 680; Kaga 540; Yola North 300, Damaturu 181 and Jere 158. 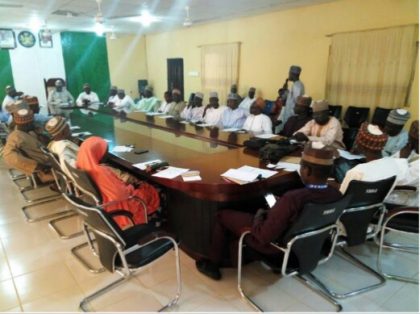 To address the issue of statelessness, about 688, 314 persons were captured in biometric registration exercises in Bama, Damboa, Konduga and Ngala Local Government Councils of Borno, as well as Madagali and Yola South in Adamawa. 102,800 returnees and Internally Displaced Persons (IDPs) under 17 years of age to secure Birth Registration Certificates in Damasak, Banki, Gamboru-Ngala and Monguno communities in Borno State. Similarly, some 20,000 displaced persons were supported to obtain statutory declaration of age and indigene letters required for the issuance of National Identification Card.

Regarding protection against Gender-Based Violence (GBV), the report indicates that 71,850 women were supported and provided with hygiene kits while 12, 650 received psycho-social support. 1, 250 humanitarian workers and volunteers were trained on protection against GBV, while 52,750 members of the community were trained on best practices to promote prevention of gender-based violence. “Over 18,650 children received psycho-social support, 25 children reunited with their families and 600 others freed from armed groups benefited from integrated child protection services,” it said.
OCHA noted that the Tripartite Commission for the Voluntary Repatriation of Nigerian Refugees from Cameroun would continue visitation to the affected areas as part of the highlights of activities for 2018. It disclosed that delegations from Cameroun and Niger were billed to visit Adamawa, Yobe and Damasak, to assess areas identified for receiving the first batch of returnees expected to arrive in January. A 16-day sensitization campaign will be conducted in December, as part of activities to commemorate International Day to End Violence against Women.

According to the document, the UN agency in partnership with humanitarian actors would prioritize planning for humanitarian response activities based on the review of the 2017 strategy and the observed evolving needs to upgrade shelter quality, harmonization and camp management. “With the dry season and continued military operations, new humanitarian needs are expected to rise. To cope, the sector is updating its contingency plan with strong emphasis on potentially needed preposition of materials and strengthening of reception capacity.”

The United Nations Children’s Fund (UNICEF) has commended the Bauchi State Government for being the only state in the country to have devoted 16 percent of its budget to the health sector. UNICEF Chief of Field Office in Bauchi State, Abdullai Kaikai, made the commendation in a goodwill message at the opening ceremony of a two-day capacity development workshop for legislators from the North East on Gombe, on Tuesday.

The workshop organised by the Legislative Network for Universal Health Coverage (UHC) has among other objectives, deepening understanding of legislation on health financing and UHC and developing legislative health agenda.

Kaikai, who was represented at the event by Philomena Irene, a nutrition specialist, said the workshop was strategic as legislators from the states would review progress made on state specific actions plans developed to improve maternal and child nutrition in the country. He noted that malnutrition was on the increase in Nigeria, with a recent Multiple Indicators Cluster Survey report showed an increase in child wasting from 24.2 to 31.5 percent while stunting had increased from 34.8 to 43.6 percent. Kaikai stated that nearly half of all child deaths in Northern Nigeria are related to poor nutrition.

“The right to food and nutrition is a fundamental right among others to ensure the survival of the child and development of the society and nation as a whole,” he said. “Addressing nutrition is of importance for achieving the Sustainable Development Goals (SDGs) particularly those related to hunger, child and maternal health, food security and education.” Kaikai further noted that investment in nutrition is cost effective but would help in reversing negative trends as well as boost GDP, stressing that a 2017 World Bank report revealed that “for every 1, 000 naira invested on nutrition would yield a 16, 000 naira return”. While describing legislators as critical in appropriation, legislation, accountability and oversight towards improving maternal and child’s health, he urged them to make adequate provisions in the 2018 state budgets.