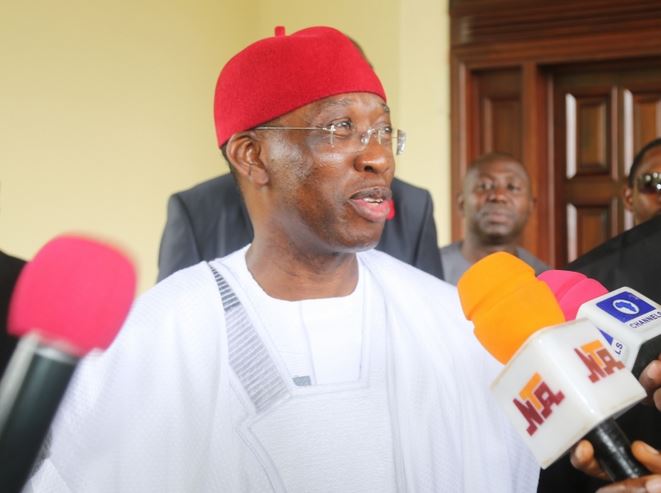 Governor Ifeanyi Okowa of Delta has disclosed that the state government’s skills and vocational programmes of job creation have made 2,324 previously unemployed youths in the state employers of labour.

He made the disclosure Wednesday in Asaba in his address at an exhibition held to showcase the products and services of youths and women in the state who are beneficiaries of the programme.

Okowa said the wealth creation programme of his administration, the Skill Training and Entrepreneurship Programme, (STEP) and Youth Agriculture Entrepreneurs Programme (YAGEP) are designed to secure a better future for Deltans.

“The job and wealth creation programme and activities of our government are designed to tackle the problem of unemployment in the state and measure the growth of micro, small and medium scale enterprises.

“Globally, it is established that certain economic sectors and activities hold the highest potentials for job and wealth creation for our economy.

“Others are public works such as environmental sanitation, housing and road construction,” he said.

The governor noted that the state government spendings on these job creation sectors generate a very high rate of returns for the economy.

“Infact, interventions and programmes in these sectors and activities, are generally cost-effective and can go a long to reduce youth unemployment and poverty.

According to him, after two cycles of the programme, a total of 2,324 previously unemployed youths of the state are now small business owners and employers of labour.

The governor further stated that these young men and women who are beneficiaries of the programme are trained and established in various enterprises, which include, ICT and Hairdressing.

He listed other areas of their skill training to include, Decorations and Event Management, Make-Over, Catering and Confectionary Cosmetology, Craft and Home Care products.

On the agricultural enterprises of the programme, Okowa listed Aqua Culture, Poultry, Crop Production, Agro Processing and Piggery as areas where the beneficiaries received training.

Okowa said: “At least 450 of these small business owners have come here today to show Nigeria and the world what they have been able to do with their hands since they were set up by the state government.

“For many of them, the journey began 15 months ago when they completed their training programme and were handed over their Starter Packs.

“Some of them commenced their businesses for as short as six to nine months ago. Indeed, theirs is a remarkable story of industry, diligence and determination to succeed.”

The governor said the state government would continue to provide support and guidance to the beneficiaries to enable them to realise their goals and provide an opportunity for many others.

“Success for these beneficiaries and for us as a government did not come easy. What we are witnessing today is a reward of two years of rigorous planning.

The News Agency of Nigeria (NAN) reports that the exhibition was attended by former Speaker of the Federal House of Representatives and Governor of Sokoto state, Hon. Aminu Tambuwal and Ex-Governor of Delta, Chief James Ibori.

In a goodwill message, Governor Aminu Tambuwal lauded Okowa for his commitment to creating job and wealth for the people of the state through the STEP and YAGEP programmes of his administration.

He described the exhibition and success stories of the beneficiaries as a laudable achievement of the Okowa administration and enjoined him to sustain the programme for the betterment of the people of the state.

“I must commend Governor Okowa for his commitment towards creating wealth for the people of Delta through these laudable skills training and agricultural programmes.

“I am very impressed with the success story of this programme, and maybe I will see how I can take lessons from here to my state,” Tambuwal said.

In his remark, Ex-Delta governor, Chief James Ibori commended Governor Okowa for his foresight and commitment to helping the youths of the state through the skills training and agricultural programme.

He said Governor Okowa has demonstrated his commitment and dedication to making the state a better place for all Deltans, and enjoined him to sustain the vision for a prosperous Delta.

“The people of Delta elected you as their governor because of their belief in you to deliver good governance and today, we have come to see that you are delivering very well.

“I want to commend you for remembering our unemployed youths with what we are witnessing here today because, at the end of the day, when you and I are gone, they will be the ones to take over,” Ibori said.

“Okowa is doing very well. May God continue to guide you and sharpen your vision as you have dedicated yourself to the service of our people,” Ibori said.

Also in a remark, a representative of the World Bank, Dr. Tunde Adekola said the Delta STEP and YAGEP programme is a World Bank assisted programme aimed at assisting the state achieve its economic development programmes.

“What we are witnessing today is a World Bank assisted programme. It is aimed at assisting the government of Delta achieves its economic development goals through wealth creation for its people.

“The programme is a demonstration of the partnership collaborations between the World Bank and the Delta state government and I must say we are very proud of the successes so far recorded,” Adekola said.

NAN reports that the exhibition featured various products and services by the beneficiaries of the STEP and YAGEP.

Cultural dancers from across the state entertained the guests.