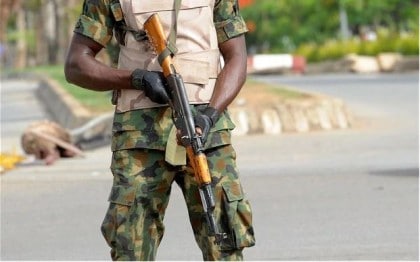 The President of the court, Brig.-Gen. Gbemiga Adesina, said at its sitting in Maiduguri that Godwin was charged with murder punishable under Section 106 (a) of the Armed Forces Act (Cap A-20), Laws of the Federation of Nigeria (LFN), 2004.

Adesina said the prosecution had proved its case beyond reasonable doubt that the soldier committed the offence and guilty as charged.

He added that the court in its judgment took into consideration the presentations and submissions of the prosecution to treat Godwin as first time offender.

He explained that the court found the accused person guilty as charged and sentenced him to death, adding that the ruling was, however, subject to ratification by appropriate authorities.

The Lead Prosecution Counsel, Lt. Col. NO Nyaro, had earlier told the court that troops of the 122 Task Force Battalion on Nov. 13, 2015, rescued 22 civilians at Yamtake village in Gwoza.

Nyaro argued that the convict fired three shots at each of the rescued men and killed them while they were undergoing investigations by the military personnel in the area.

The Court Martial also convicted and sentenced one other soldier, Sgt. Innocent Ototo, to life in prison after conviction for manslaughter.

Ototo was convicted for torture, which resulted to the death of a 13-year-old boy, Master Yakubu Isa, at Zabarmari village of Maiduguri Local Government Area.

The prosecution told the court that the convict had on May 15, 2015, beat up and rubbed pepper on the body of the minor, whom he accused of stealing his cell phone, arguing that the boy died while in detention at the military guard post in the area.

Corporal Benjamin Osaji, an accomplice in the torture and murder of the minor was also sentenced to 20 years in prison.

Two other soldiers, Ayuba Jonathan and Bitrus Yunana were also sentenced to five year imprisonment each.

The two were convicted for illegal possession of ammunition.

The president of the Court Martial said the offences contravened the Nigerian Army Rules of Engagement (ROE), Nigerian Laws and Geneva Conventions which Nigeria is a signatory.

Adesina admonished troops to adhere strictly to the ROE and Human Right Laws in the ongoing counter-insurgency campaign in the northeast.

The court adjourned sitting until to Jan. 11. (NAN)