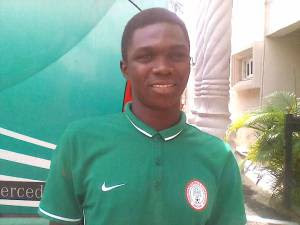 Thenff, Abuja: When fate plays a dirty trick on you, it is the quality of response you bring to beat it that makes the hero out of you. That is the story of boko haram survivor, Nura Mohammed, he was a victim of the insurgency. That won’t stop him. He goes from one street of Maiduguri, the Borno state capital, plying his silky skills, football. 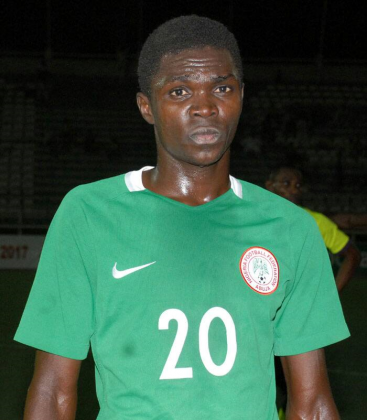 He grew up as an orphan in the city having lost both parents before he was six years old. Football was the only succour for him. He enjoyed playing the game with some of his childhood friends. Sadly, tragedy struck when some of his friends were killed by the Boko Haram insurgents, some went missing till date, but by fate and providence, Nura escaped and he was not recruited into the Boko Haram terrorist group as some of his mates, who were forcefully recruited into the deadly group.

“I cannot count how many of my friends that were killed by Boko Haram. Just mentioning the name of the sect could earn someone death. I remember one of my friends who never liked people to mention the name Boko Haram around him. Unfortunately, he was killed. I think Musa was his name,” Nura Mohammed told Totori yo sef in Abuja.

Nura Mohammed…in the Super Eagles team
Nura Mohammed…in the Super Eagles team
Football gave Nura joy, the field was where he could forget the brutal killings of some of his childhood friends by Boko Haram insurgents. His football skills were the weapons in his possession to put smiles on the faces of football loving fans in Maiduguri and the region. Some football fans in Maiduguri sometimes called him Messi, others prefer to call him Ozil, and Nura said that he has no qualms being called such names, but he does not have any specific role model in football.

“I don’t have any footballer that I will say he is my role model. I am a left footed player that can operate from the outside left or the left sided midfield.

“As a left footed player, I normally watch players like Lionel Messi, Mesuit Ozil and James Rodriguez whenever their teams are playing. I concentrate on how they make good use of the ball to help their teams win matches,” he added.

Nura the El-Kanemi Warrior: Not too long came the officials of El-Kanemi Warriors Football Club of Maiduguri. The club signed the young Nura into their fold as a player of the El-Kanemi Feeders team. He continued to blossom in the round leather game. It was a delight to see him doing well for the club in the Nationwide League One season. That is the league where all the feeder teams of clubs in the Nigeria Professional Football League (NPFL) participated across the federation. 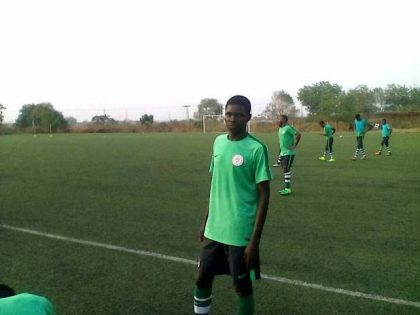 The football ingenuity of Nura continued to flourish as he was part of the League Management Company (LMC) La Liga Under-15 tournament held in Lagos last year where his team (North East) crashed out in the semi final of the tournament.

He went back to Maiduguri where football is played in the midst of bomb explosions in some parts of the city, all these ugly incidences never deterred Nura from following his dream.

“I really have passion and interest for football and I never relented even when I know that it could be very dangerous because of the security situation in Borno state. Even when I heard of bomb blasts, I was still playing football competitions in some local government areas in the state,” Nura said.

Imama ‘The Magician’ Amakapabo: There came Imama Amakapabo, who was signed by the management of El-Kanemi Warriors of Maiduguri as their new Technical Adviser for the upcoming new season. Imama, in his attempts to access the talents at the disposal of El-kanemi Warriors organised a training match between the El-Kanemi senior and El-Kanemi Feeders. The game was all the teenage Nura needed to convince Imama and his technical crew that a pure diamond can be found at a place where dynamites and bombs have prevailed.

Imama wasted no time in promoting Nura to the main team of El-Kanemi where he started training and learning the rudiments of the tasks ahead of him in the Nigeria Professional Football League (NPFL) season that will begin on 14th January, 2018.

“I watched him play for the Feeders team against the main team. He showed the potentials I always wanted in a player and as a young player in his teen age, I was amazed with his talent, vision and his total output on the field. He was excellent. So, I promoted him to the senior team,” Imama Amamakapo told Totori yo sef.

Pre-season output: The pre– season was intensive for El-Kanemi Warriors. The team found themselves in Kano for the Ahlan pre-season tournament that comprised of 12 teams mainly from the Nigeria top flight league. Nura featured for El-Kanemi Warriors playing the left side of the midfield as they trampled on teams leading to the semi-finals.

Unfortunately, the dream of El-Kanemi Warriors winning the tournament crashed at the semi –final where they lost to Akwa United of Uyo.

Something unusual and very unique was about to be unfolded in the career of the teenage sensation in El-Kanemi Warriors. Having given a good account of himself in all the games played at Ahlan pre-season tournament, Nura had caught the attention of Salisu Yusuf, the chief coach of the Super Eagles and he was invited to the Super Eagles team for the Nigeria Professional Football League (NPFL) Super 6 tournament in Kano, where the technical crew of the Super Eagles used the tournament as a preparatory ground for CHAN tournament in Morocco.

A Super Eagle: “I saw Nura Mohammed during Ahlan pre-season tournament where he played for El-Kanemi Warriors. He displayed good football in the outside left position and I then invited him to the Super Eagles for the Super 6 tournament,” Salisu Yusuf, the chief coach of the Super Eagles said.

Despite the arrays of talent and experienced players in the camp of the Super Eagles, Nura asserted himself and he was able to play his part when the national team defeated MFM FC 3-2 to win the tournament. Nura came as a second half substitute in the final game to give two assists. His composure was far way beyond his age, his precision passes were mark of excellence and his dribbling runs were all trade mark of a player that has great potentials for the future.

“He did not disappoint at the Super 6 tournament. We were impressed with his performance and the door is open for him to be in the team to CHAN tournament in Morocco, if he continues to do well in training,” Yusuf added.

LMC policy on Eagles teenagers: Being a teenage sensation at 15 years, there are clamours for him to be drafted into any of the age grade national teams of Nigeria, which was not supported by Shehu Dikko, chairman of League Management Company (LMC), as he insisted that once a player is good enough for the Super Eagles, then no need to invite the same player to the age grade teams again.

“The player is good for the Super Eagles and so he should remain with the team. Nura Mohammed was one of the players that featured at the LMC La Liga tournament last year and if today, the player finds himself in the Super Eagles, this is very good for our football and for what LMC is doing to develop the game,” Dikko said.

He added: “Young players in England like Rashford, Raheem Sterling and the rest that found themselves playing for England as teenagers were never drafted to play for the junior teams of England again. So, this should be the case concerning Nura Mohammed and other Nigerian young players that feature for the Super Eagles”.

The teenage prodigy made history as the youngest player to wear the jersey of the Super Eagles when he featured for the team in the final game of the Super 6 tournament last Sunday, few days after he clocked 15 years old on 2nd December, 2017.

“I dreamt of playing for the Super Eagles one day, but I never imagined that it will happen very suddenly. I am in the Super Eagles to learn and I improve my game and I will work very hard not to disappoint the technical crew of the team,” he concluded.