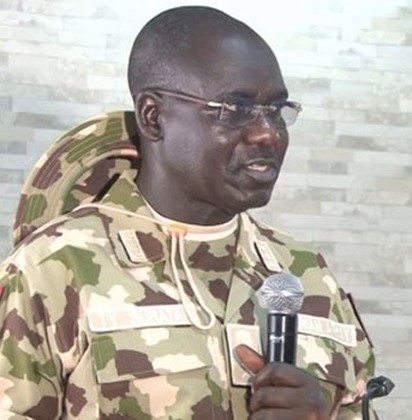 The Chief of Army Staff, Lt.-Gen. Tukur Buratai, said he celebrated the Christmas with troops in Gwoza to attest to the success so far recorded in the ongoing counter insurgency operations in the North-East.

Buratai, who spoke at Gwoza, headquarters of Gwoza Local Government Area of Borno, also said the celebration attested to the resilience of the Nigerian Army in the operations.

He commended the troops of 26 Task Force Brigade, whose headquarters is located in Gwoza, for securing the town and its environs.

The insurgents, led by the so-called Shekau had captured Gwoza toward the end of 2014 and declared the town headquarters of their Caliphate until April 2015,when the military liberated it from the terrorists.

Represented by Maj.-Gen. Ibrahim Alkali, the Chief of Administration, the chief of army staff urged the troops to maintain the momentum of the ongoing operations to flush out remnants of the Boko Haram terrorists from the North-East.

He also charged the troops to be loyal to constituted authority.

Since assumption of office in 2015, the army chief has made it a tradition to celebrate with troops in the frontline in the North-East, to boost their morale.

He celebrated the 2016 Christmas with soldiers at Damasak in the West of Borno, a border area between Nigeria and Niger Republic.

Buratai also celebrated the 2017 Eid-el-Kabir with troops at Mafa, in Borno East as well as Nigeria’s 57th Independence anniversary with troops at the Theater Command, Operation Lafiya Dole, in Maiduguri.

The News Agency of Nigeria (NAN) reports that inhabitants of Gwoza and surrounding villages turned out in large numbers to celebrate with the troops, while various cultural groups from the area added colour to the occasion.

The Theatre Commander, Maj.-Gen. Rogers Nicolas, and Maj.-Gen. Nuhu Angbazo, the Chief of Civil/Military Affairs, joined troops of the 26 Task Force Brigade in rendering the Christmas Carol to thrill the gathering.

NAN also reports that Maj.-Gen. Mani Yusuf, the General Officer Commanding (GOC) 7 Division,  in his vote of thanks, announced that he had a message for the Boko Haram terrorists.

At that moment, every journalist, who turn up to cover the event adjusted his seat and got set to jot down the message or record it.

But Yusuf called on the Artillery to “send the message”, and in quick succession, three huge sounds from the artillery rented the air, creating fear in some civilians at the occasion.

The bang revibrated around the long stretch of the hill which provides natural protection to Gwoza.

“There is no cause for alarm, it is a message to Boko Haram and they understand it,” Yusuf said.

In an interview, Sen. Ali Ndume (APC Borno South), an indigene of Gwoza, who was at the occasion, described the army as “everything” to the people of Gwoza.

“The Army are everything, almost everything to us; they are our teachers because they get involved in teaching our children, they are our doctors, and even share their ration with our people.”

Ndume called on other security agencies, including the Police and the Civil Defence to work with the army in the maintenance of the peace and security prevailing in the town and environs.

Ndume also called on the Inspector-General of Police, Mr Ibrahim Idris, to complement the army’s efforts by reopening the Mobile Police Force Training College in Gwoza to beef up security in the area.

The insurgents had attacked, destroyed the institution and kidnapped a number of personnel in the school at the height of the insurgency in Borno.

The lawmaker described Gwoza people as resilient and vowed that they would not surrender the town to the terrorists.

“If they try to come back, we will not run away, but will cooperate with the army to resist them.

“We are not going to run away, so, let nobody – terrorists be deceived that they are going to chase us away. We won’t run away, if we are going to die, we will die with the Nigerian Army.”

On the the complaint of inadequate potable water by the Internally Displaced Persons (IDPs) and other people in the community, Ndume said there were already 10 functional boreholes in the town.

He said those boreholes were provided through combined efforts of the State Government, the  legislators representing the area and some Non-Govermental Organisations (NGOs).

Ndume, however, noted that enough water could not be provided in the area and the North-East, generally, because of the rocky nature of the the region.

Rep. Asabe Vilita (Gwoza, Chibok, Damboa) Federal Constituency, appealed to parents not to “donate” their children and wards to terrorists again for use as suicide bombers.

“My call to parents is that they should shun this ugly trend of giving their children to the terrorists.

“We need to collaborate with the security agencies to win the war against insurgency.

The common complaint in all the camps is shortage of water.

NAN gathered that since the recapture of Gwoza, the terrorists had made several failed attempts to attack the town, but were repelled and neutralised by troops.

Gwoza is located at the base of a huge hill stretching down to Cross River to the South and Central Africa Republic, to the North.

Troops have taken positions on the hill to check and neutralise infiltration by remnants of the Boko Haram terrorists.

To the East of the town is Mandra mountain, a border between Nigeria and Cameroon and bordering Gwoza to the West is the Sambisa forest.

It had been speculated that some remnants of insurgents loyal to Shekau were hibernating on the mountain, but reports show that they had been flushed out by air bombardment by the Nigerian Air Force.

Gwoza is one of the towns hardest hit by the nine-year insurgency. The terrorists had destroyed many structures, including houses, places of worship and schools before retreating.

In the midst of this, posters of politicians seeking election and re-election in 2019 currently adorn the insurgency-ravaged ancient town.

The Borno Government has already begun reconstruction and rehabilitation of structures destroyed by the terrorists in the town. (NAN)