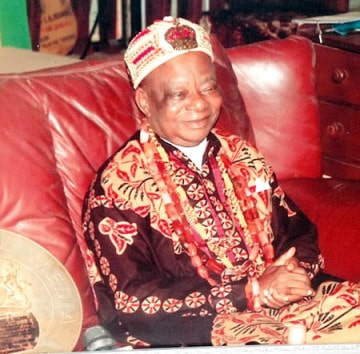 President Muhammadu Buhari has felicitated with his Royal Highness Dr. Isaac Ikonne, Enyi 1 of Aba as he turned 88 years on 1st January 2017.

The president joins the government and people of Abia state, the Abia state traditional council and Ohaneze Ndigbo in celebrating him and whose 42-year reign has witnessed tremendous improvement in community relations, peace, and prosperity of his domain.

In a statement by presidential spokesman Femi Adesina, the president described the Enyi of Aba as one of the oldest traditional rulers in the southeast and the first to receive staff of office in the old Imo state.

He extolled his sterling leadership qualities which earned him the position of chairman of Ohaneze Ndigbo traditional rulers and other numerous recognitions and awards.

The president affirms that Eze Ikonne’s entrepreneurial spirit and large heartedness in helping the underprivileged made him an example to younger traditional rulers and acknowledged his uncommon loyalty, commitment, and patriotism in nation building.