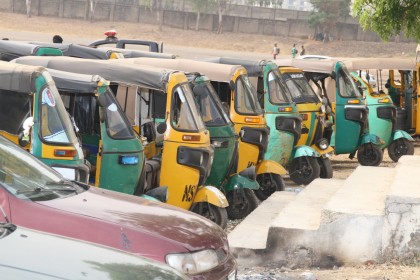 The Joint Task Team for the Cleansing of Abuja City recently reconstituted by the FCT Minister, Malam Muhammad Musa Bello has impounded 114 unpainted taxis within the first one week of its operations.

The Acting Director of the FCT Directorate of Road Traffic Services, Mr. Wadata Aliyu Bodinga made this disclosure on Tuesday when he visited the Minister’s office.

The Director disclosed that 104 Keke Napep (Tricycles) were also impounded and riders prosecuted at the Mobile Courts during the same period.

Mr. Bodinga further disclosed that during the one-week operation of the Task Team, 8 commercial Motorcycles (Okada) were also impounded and noted that in the subsequent weeks special attention would be given to impounding and arrest of Okada.

According to him, the Task Team would hit the Okada riders from all angles from the Airport road, Gishiri village, Wuye, AYA and Asokoro area; warning that all those arrested would face instant prosecution.

On the menace of commercial sex workers, he said that the Task Team has so far arrested 89 of them who have been prosecuted and handed over to the Social Development Secretariat for rehabilitation to enable them learn useful skills.

The Director, however, urged the residents of the Federal Capital Territory to assist the FCT Administration by not patronising the unpainted taxis, Keke Napep, Okadas as well as the commercial sex workers.

He warned that their existence have security implications because they are veritable channels being used by the criminals which is in nobody’s interest.

The reconstituted Task Team which has the mandate to deal with traffic problems, environmental nuisances and any social menace within the Federal Capital City, commenced operation last Tuesday January 15, 2017.