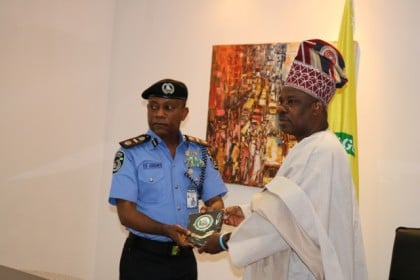 The AIG first paid a courtesy call on the Executive Governor of Ogun State, Senator Ibikunle Amosun at the government office.

The governor commended the Police for their proactive stance in recent times and urged them to maintain the tempo. Governor Amosun also vowed to rid Ogun State of criminals in order to keep intact the ‘most industrialized State’ status of the State, pledging to support the Police with logistics in order to make their work easier.

In his palace the Alake of Egbaland, Oba Gbadebo Aremu pleaded with the Police boss to check the spate of kidnapping and especially land grabbing within the State.

At the Ogun State command Headquarters, the AIG addressed his officers and men, urging them to be of best behaviour, paying attention to fundamental human rights.

AIG Aderanti, mni also visited the former President, Chief Olusegun Obasanjo at his Hilltop Mansion, seeking his support for the Police as always.