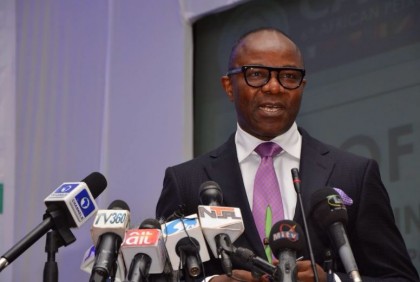 Ibe Kachikwu, State Minister Of Petroleum On Prize Of Fuel Hike In Bayelsa

NAN, Abuja; The Department of Petroleum Resources (DPR) in Bayelsa says it has stepped up its regulatory activities to check unauthorised hike in the price of petrol by marketers in the state.

Mr. Asuquo Antai, Operations Controller of DPR in the state told the News Agency of Nigeria (NAN) on Thursday in Yenagoa that the directorate had intensified surveillance and increased its patrols.

Some dealers dispense petrol at N160 against the approved price of between N140 and N145 per liter.

Antai said an additional patrol team was recently introduced to reach every part of the state in a bid to keep a tab on filling stations.

The operation controller said that the step became necessary following the decision of some marketers to exploit members of the public by increasing the pump price of petrol.

“We want to emphasize to petrol marketers that we will not tolerate profiteering.

“We are also aware that prices at the Nigerian National Petroleum Corporation (NNPC) depots have remained the same.

“Some marketers lift from there and claim that they bought from private depots at higher prices.

“We have met with the Independent Petroleum Marketers Association of Nigeria (IPMAN) officials in Bayelsa and they have complained that products arrive in the depots above the ex-depot prices of N136.

“They explained that the pressure on price was eroding their margins and eating into their profits.

“We have advised them to discourage profiteering by not sourcing the products at exorbitant prices because we cannot allow anyone to sell above N145.”

Antai said that the DPR in Bayelsa would not stand akimbo while petrol dealers were exploiting members of the public who were already challenged by the recession.

“I advise fuel dealers to patronize the NNPC depots where products are loaded at government approved rates.

He urged members of the public to report filling stations selling above N145 to motorists.