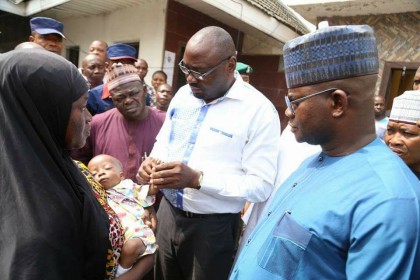 A Kogi State civil servant, Mrs. Habibat Abubakar Abdulkareem, had her fervent prayers answered on Monday, 6th February, when the Governor of the state, Alhaji Yahaya Bello, promised to foot the medical bills of her 10-month-old son, Abdulfatai Abdulkareem, who is suffering from a hole in the heart.

The Governor made the pledge when he paid an unscheduled visit to the venue of the Kogi State Civil Service Appeals Committee sitting in the Lugard House, Lokoja. The Governor, who spent over 30 minutes interacting with the committee members and civil servants, expressed satisfaction with the quality and speed of work being done by the committee. He praised the dedication of the committee members, who are working late nights and over weekends in order to meet the six-week deadline given by the Governor.

Alhaji Bello also thanked the civil servants for their patience and prayers for a successful completion of the exercise. It was at this time that his eye caught the sad mother, who was clutching her sick baby close to her chest. He inquired about the condition of the child and was fully briefed by the doctor on site. There on the spot, the Governor vowed to take full responsibility for the payment of the child’s medical bills where ever the corrective surgery is carried out.

The Director General on Media and Publicity to the Governor, Kingsley Fanwo, said the visit was a demonstration of the empathy the Governor feels for his followers and the genuine love he enjoys amongst Kogites.

He said, “To enthrone transparency in the process of the Appeals Committee, the proceedings are being livestreamed and the Governor is seeing everything live in his office. He still made the time to go and interact freely with the people, where he directly explained to them the purpose of the exercise. As the People’s Governor, Alhaji Yahaya Bello spoke directly to them and some even confessed to committing the offenses levelled against them. They pleaded for clemency and His Excellency said he would wait for the report of the committee before taking a decision.”

The Governor’s image-maker warned members of the public to desist from fraudsters, who are going round to promise them assistance to scale through the exercise in exchange for money. He said the members of the committee are people selected carefully for their impeccable integrity and would not stoop to such levels. He also promised that the committee would do all it can to ensure they meet the six-week deadline to complete their assignment and submit their report to the Governor.

Meanwhile, 97 pensioners were paid a total of N191, 655, 313.35 as gratuity last week. According to the Hon. Fanwo, more will get their retirement benefits as the system gets more regularised and computerised