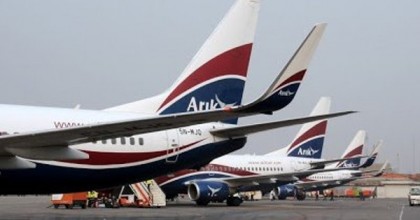 NAN, Abuja; Arik Air was taken over by Assets Management Company of Nigeria AMCON because the airline was owing it N146 billion, out of a total N352.5 billion owed global creditors, AMCON’s CEO Ahmed Kuru has said. He made this known at a meeting with the Senate Committee on Banking, Insurance and other Financial Institutions in Abuja.

AMCON took over the management of Arik on Feb. 9. Kuru said that AMCONacquired non-performing loans of Arik  in 2011 from two banks in line with AMCON’s statutory mandate. Arik owed  Union Bank  N71 billion and Keystone, N14 billion. According to him, the facilities were granted to Arik Air for purchase of additional aircraft and to refinance existing loans and the default in repayment posed systemic threat to the banks and economy. The managing director said that Arik was also indebted to Standard Chartered Bank, Zenith Bank, Ecobank and Access Bank to the tune of N165 billion, adding that there were huge foreign components of the airline’s debt.

The AMCON boss said in spite of the leniency and good faith demonstrated by AMCON throughout the negotiations, Arik refused to adhere to the terms of settlement of some of the debts. He added that AMCON continued to bear the burden of repaying some of the debts, including that of Bank of Industry, which was at one per cent interest rate.

“So far, AMCON has paid N9.05 billion on behalf of Arik. Total recoveries from Arik till date is N4.6 billion and total repayment by Arik in the last 12months is N50 million only. “As at December, 2016, Arik’s debt in AMCON stood at N146 billion due to mounting interests and unpaid principal. “The consolidated exposure of debtor companies in which Mr John Arumemi-Ikhide is the principal promoter in AMCON stands at N263.7 billion.

“This figure excludes Arik’s indebtedness to other banks, aviation authorities (local and foreign), vendors, contractors and workers. “Arik has about 30 aircraft, the largest fleet in Nigeria and holds approximately 55 per cent to 60 per cent of the air transport market in Nigeria. “It serves 18 domestic and 11 international destinations, including Johannesburg, London, Dubai, and New York, with estimated revenue at N7 billion monthly,’’ he said. In his remark, Chairman of the committee, Sen. Rafiu Ibrahim, said that the committee supported the action taken by AMCON. “Whatever you do within the ambit of the law and that you do not infringe on the fundamental rights of Nigerians, we are in support.

“We will be interested as to what led you to your final decision and your turn-around plan for Arik,” he said