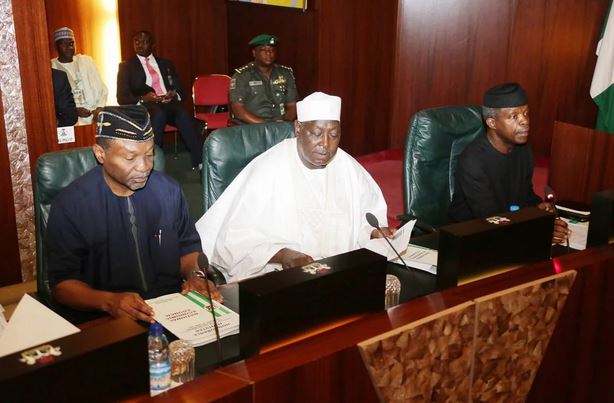 As the Federal Government continues its monthly Budget Support Facility to the States, a verification process to ensure that benefiting State governments comply with the mutually agreed Fiscal Sustainability Plan prescribed by the National Economic Council, NEC, has started.

This disclosure emerged at the first NEC meeting this year, presided over by Vice President Yemi Osinbajo, SAN. NEC is composed by all the 36 State Governors, the FCT Minister and the Central Bank Governor.

According to the Finance Minister, Mrs. Kemi Adeosun,who briefed the Council today, eight accounting firms have been appointed and have already begun the audit process.

Budget and National Planning Minister Udoma Udo Udoma, made a presentation to the Council on the National Road Safety Strategy (NRSS) 2014 – 2018 document before the inauguration.

He said the NRSS document was approved by FEC and has provided for the establishment of the Advisory Council, as a demonstration of Government’s commitment to address the challenges of road safety in the country in line with UN Agenda to reduce road accident related deaths.

Members of the 24-man Advisory Council include the six Governors representing each geopolitical zone as follows:

Honourable Minister of Labour and Productivity

Honourable Minister of Information and Culture

Secretary to the Government of the Federation (SGF)

The Minister also assured the Council members that Federal Government has a recovery plan that will take Nigeria out of the woods.

Udoma said that consultations on the plan are ongoing to firm-up the plan with clear roles for all the stakeholders and the States.

He told the Council that the plan addresses, agriculture and food security, energy sufficiency-power and petroleum availability, improving transportation infrastructure, industrialization, SMEs, and manufacturing and stabilization of the macro-economic environment.