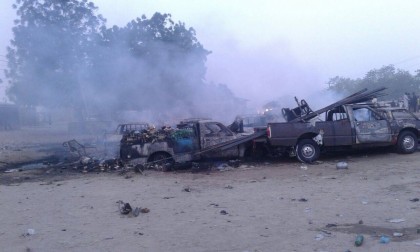 Scene Where Suicide Bombers Were Killed

The National Emergency Management Agency has confirmed the death of Seven 7 Boko Haram suicide bombers who attempted to attack Maiduguri , on Thursday

A statement by Sani Datti Head of Media and Public Relations of NEMA stated that the driver of the attackers attempted to overrun the security post where the security personnel were stationed, but few of the personnel sustained minor injuries, while the remaining bombers detonated their IED in some of the communities in Muna Dalti settlement.

Over 14 loaded trucks were burnt by the suicide bombers though no casualty was recorded. The seven corpses of the suicide bombers were evacuated to the State Specialist Hospital by NEMA and Borno SEMA team Read; #SuicideBomber: ‘Boko Haram Paid me N200’

Victor Isuku, the Police Spokesman also confirmed in a statement issued, said, “Yesterday at about 2318hrs, a suicide bomber sneaked into the midst of 13 pick up trucks loaded with goods along Maiduguri/Mafa road, said to be awaiting departure to Gamboru Ngala early hours of today (Friday) and detonated Improvised Explosive Devices, IEDs strapped on self. “The resulting Explosion razed down the parked vehicles beyond recognition. EOD/Police patrol team were promptly deployed to the scene to restore safety & normalcy”.