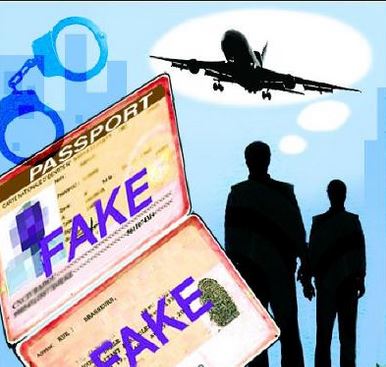 A visa racketeer Olugbenga Fanbunmi has been convicted by a Federal High Court in Abuja for fraud.

Fanbunmi was arraigned by the Economic and Financial Crimes Commission, EFCC, before Justice Mamman Kolo of the Federal Capital Territory, FCT High Court on one-count charge bordering on advance fee fraud and the conviction was secured on February 13, 2017.

According to the Head of Media & Publicity of the commission, Wilson Uwujaren in a press release said Fanbunmi, who holds a diploma from the Moshood Abiola Polytechnic, Ogun State, is a member of a syndicate that specializes in forging bank statements, employment records, international passports, national identification card, and supporting documents needed to process visas for the United Kingdom.

His nefarious activities date back to 2005 during which he mastered the art of forging documents for “abusive visa applications”.

Between 2007 and 2016 he helped to forge bank statements as part of documents to process UK visa for 11 people. He had succeeded in

helping 15 people obtain visas to travel to the UK where they were forced into prostitution.
He pleaded “guilty” to the charge on February 9, 2017.

Based on his plea, Justice Kolo, convicted him of the charge and sentenced him to four years in prison