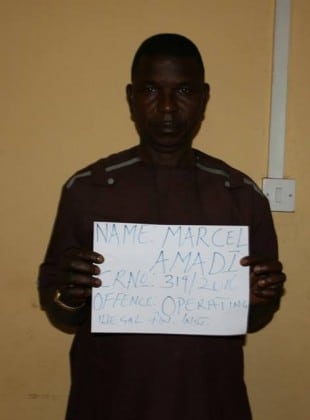 The Economic and Financial Crimes Commission, EFCC, on February 20, 2017 arraigned one Marcel Amadi, before Justice Dugbo Oghoghorie of the Federal High Court Enugu, Enugu State for operating a financial institution without any valid license contrary to Section 2(1) of the Banks and Other Financial Institutions Act, Cap B3, Laws of the Federation, 2004 and Punishable under Section 2(2) of the same Act. Read Also; 1bn Fraud: EFCC Arraigns Shema and three others

Amadi, who is facing a three-count charge is also being prosecuted for issuing a dud cheque to the tune of N25,100,000.
It was alleged by a petitioner that Amadi offers financial services to clients through his company, M. A. and Sons Commission Agents Nigeria which though registered with an Enugu Magistrate Court, was not registered with either the state government or the Central Bank of Nigeria (CBN) to operate such financial business. Read Also; Armsgate: EFCC Tenders More Exhibits Against Badeh

His travail began when after over a period of three months, he stopped the payment of interest on a N25million invested in the business by the petitioner and could not also refund the principal amount.

It was further revealed that in order to ward off pressures from his creditor, the accused person who had held the invested fund since 2010, issued six cheques to the complainant all of which were returned unpaid for insufficient funds.
The accused pleaded not guilty to the charges.
One of the counts read:

“That you, Mr. Marcel Amadi (TRADING UNDER THE NAME AND STYLE OF M.A AND SONS COMMISSION AGENTS NIG) between 2005 to 2015 at Enugu within the jurisdiction of Federal High Court of Nigeria, carried on banking business by accepting cash deposits from members of the public without a valid license from the Central Bank of Nigeria and thereby committed an Offence Contrary to Section 2(1) of the Banks and Other Financial

Institutions Act, Cap B3 Laws of the Federation, 2004 and Punishable under Section 2(2) of the same Act.”
In view of his plea, the prosecuting counsel, Rotimi Ajobiewe asked for date for commencement of trial.
The defense counsel, I. M. Ugwu, pleaded that his client continues with the administrative bail earlier granted him by EFCC.
Justice Dugbo granted the prayer of the defence and adjourned to March 14, 2017 for trial to commence.