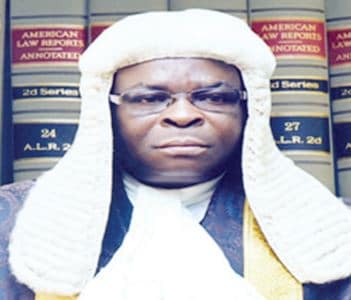 Onnoghen To Be Sworn-In As Chief Justice Today

Presidency sources disclosed yesterday that the inauguration would take place at 9:00am inside the Council Chambers of the Aso Rock Presidential Villa in Abuja.

Justice Onnoghen’s nomination was last week confirmed by the Senate.

President Muhammadu Buhari, who is on extended vacation in the United Kingdom, had last November inaugurated Onnoghen as acting CJN sequel to the retirement of Justice Mahmud Mohammed.

READ: Who Is Onnoghen, the New Acting Chief Justice of Nigeria?

The acting president had on February 7 forwarded Onnoghen’s nomination to the Senate.

Onnoghen will be the 20th person to occupy the position since 1914, according to judiciary records.

Sixty-six year-old Walter Samuel Onnoghen has been a Justice of the Supreme Court of Nigeria since 2005.

He was appointed by President Muhammadu Buhari to succeed, in acting capacity, Justice Mahmood Muhammed in November last year.

He graduated from the University of Ghana at Legon, Ghana in 1977 and from the Nigerian Law School in Lagos in 1978.

Before joining the Supreme Court, he was a judge in Cross River State and a justice of the Court of Appeal.

Here is the list of Nigerian chief justices since 1914: